Hey, it's my 400th post of the year! And what better way to celebrate that momentous milestone than with a review of one of the worst mini-series to come out of DC in years, Brightest Day!? Enjoy... If you dare!!! MWA-HAHAHAHA!!!

Overall: This issue was very Martian Manhunter heavy, with a touch of Firestorm thrown in. I'll start with the Firestorm story first, since it was quicker. The Firestorms decide to chase after Deathstorm and his newly recreated Black Lantern Corp, which is fine by Deathstorm since he holds a major numbers advantage. Before we get any kind of action, the voice in Deathstorm's head(Nekron? Anti-Monitor? Deadpool? Pikachu?)tells him to ignore the Firestorms and to get the White Lantern(whoever or whatever that is)instead. As for the Martian Manhunter, he heads to Mars where he is forced to battle that evil female Martian(whose name is D'Kay D'Razz in case you care). D'Kay wants to restart the Martian race with J'onn, but J'onn refuses to have sexual relations with that woman, Miss D'Razz(heh heh), because she's evil and I don't know, ugly I guess. Anyway, the two Martians battle, with D'Kay taking the battle to J'onn's mind, where he is forced to confront the JLA. J'onn shakes D'Kay's influence and beats her into the ground, until all of the dead Martians on Mars come back to life(huh?). J'onn is reunited with his family and it feels so good, but alas, it's a mental trick D'Kay was playing on J'onn, and this issue concludes with J'onn embracing D'Kay, who he believes to be his wife.

This was a weird comic for me. There were parts that were just horrid, like D'Kay's lame origin(she made herself forget she was ever a Martian, but remembered she was a Martian when J'onn came back? Zuh??), but there were other parts that were... I wouldn't say good, so I'll say less horrid. The actual fight between J'onn and D'Kay was alright, and the Firestorm stuff was okay I guess(even though I'm SO sick of their dumb “Odd Couple” dynamic already), but as usual, this comic disappointed me. The end was especially pathetic, considering J'onn had been honing his telepathy for YEARS, while D'Kay had locked her telepathy away while she lived like a human. I'm supposed to believe that D'Kay, who'd have to be considered a lapsed telepath at best, was powerful to defeat J'onn, who's shown he's one of the most powerful telepaths in the DCU? No way! How much longer is this mini going to go on?? 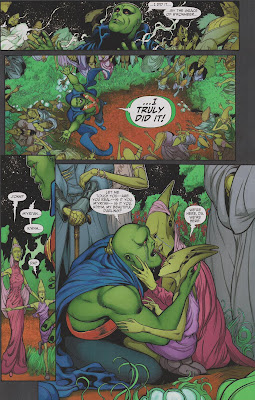