Happy Christmas Eve everybody! Three comics on tap for tonight, all from Marvel. Thus far this week's comics have been rather underwhelming, so here's hoping things pick up a bit starting............. Now!

What Happened: We finally learn more about that weird scene where we find Madrox standing over the corpses of himself and Layla on their wedding day. It appears that the moment Madrox died at the hands of Bloodbath, he somehow was transported to another dimension, one where he married Layla and Banshee hadn't died. Madrox ends up learning that it wasn't Wolfsbane who committed the murders, but her daughter(remember, in the 616 Marvel U Wolfsbane had a son), who killed Madrox and Layla at the behest of Layla herself(?!?). Wolfsbane's daughter goes to kill Madrox, since she figured she didn't properly kill him back with Layla, but Madrox manages to get away from Wolfsbane's daughter... Only to get run down and killed by a drunken Valerie Cooper... HA!! This issue closes with Madrox waking up near the corpse of another dead Madrox, this time in a apocalyptic looking world.

The Good: As always, Peter David can tell a good story AND manage to throw a couple of legit laughs in there. Val drunkenly running poor Madrox down really made me laugh for some reason... It just made perfect sense in an idiotic way... I THINK I can see Madrox's way out of this and back to his proper dimension already... The Layla who was killed was adamant about Wolfsbane's daughter killing her... Obviously THAT Layla KNEW 616 Madrox would be dying at the same time in the 616, and would somehow end up in her dimension. Is that uber-confusing? God yes... Especially the way I worded it! But I do now kind of/sort of see how Madrox is getting out of this one. I enjoyed the wedding reception and enjoyed seeing Quicksilver, Banshee, and yes, even Shatterstar with his early 90's look.

The Bad: I kind of hope that my theory isn't the way this story winds up heading, because that would make the next few issues as Madrox heads back home kind of anti-climatic for me... Drinking and driving is BAD, Valerie!!

The Verdict: I enjoyed this issue. I really did. The story was strong, the art matched it and as always, the dialogue was top-notch. No real complaints here. 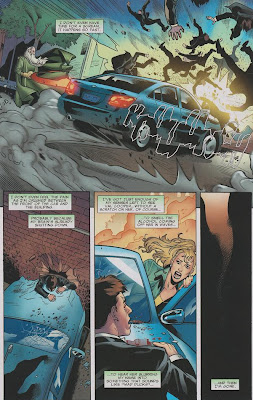 That panel with Madrox getting hit by the car and dupes flying everywhere was both horrible and hilarious!
Posted by x-man75 at 8:00 PM