First review for this Monday? The Thunderbolts. I've been enjoying the evil Thunderbolts trip through time, and I'm hoping this issue will be as good as the prior few have been.

What Happened: We discover right away that Satana had been trapped by some evil spirits that had taken to hiding in the bodies of London's streetwalkers back in the 1880's. That is the reason Hyde has been killing prostitutes, to free Satana from the spirits. The evil T-Bolts attack the spirits, allowing Satana to break free of their spell, which results in Satana eating the souls of all but three of the spirits in retribution. The following night, Boomerang and Satana dress up as locals and manage to hire the still possessed hookers, taking them to a room where Satana eats the souls of all but one of the spirits, telling Boomerang that he had to kill the final woman Jack the Ripper style in order to keep the past intact. Boomerang reluctantly and angrily does as he's told, and Centurius reveals that the Thunderbolts must have actually been Jack the Ripper, thus explaining why he was never caught. With that, the evil T-Bolts fire up their base and end up catapulting even further back in time, winding up during the days of Camelot. Besides that, Luke Cage, Songbird and Valkyrie manage to open up a connection to Troll's battle ax just long enough for Ghost to secretly teleport to the evil Thunderbolts.

The Good: Satana eating the spirits souls was fun. It was nice to see that the good Thunderbolts in the present were still trying to track down their evil counterparts.

The Bad: The Thunderbolts were Jack the Ripper? Lame. The way this story turned out really bugged me... I'm not sure what it was, but the evil T-Bolts being Jack the Ripper just sort of bothered me... I'm not looking forward to the evil T-Bolts going further back in English history... Couldn't they have gone to Greece or Rome or hell, the Ottoman Empire or something instead of England again?

The Verdict: Eh, I didn't like this one. The Thunderbolts as Jack the Ripper reveal really annoyed me, to the point where I didn't enjoy this story in the least. Claiming the Ripper's victims were possessed by evil spirits, thus explaining their fate just seemed... wrong to me... 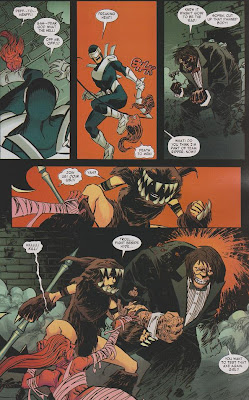