Next comic in line for a rushed review, Avengers: Solo... Man am I behind with my reviewing so far this week...

What Happened: Trace reveals to Hawkeye that she(as well as several other women) had been operated on by some clandestine organization that wanted the women to give birth to little super-soldiers. The person supposedly running this organization? Captain America. It goes without saying that Hawkeye doesn't believe his role model would do something like that, and tries to convince Trace of that fact, but Trace insists that the people running the clinic were followers of Cap. Because of that, Trace implores Hawkeye not to involve any other Avengers in the investigation into what was really happening, and Hawkeye agrees to that. Hawkeye manages to trick Chance into giving him some information on who was running the organization that experimented on Trace and her friends, and upon leaving the prison Chance was being housed in, Hawkeye is attacked by some freaks sent out from the mysterious organization. Trace comes in to assist Hawkeye, as was the plan, but she decides to go against Hawkeye's plan by allowing herself to get captured, figuring Hawkeye could now follow her back to the organization's headquarters. Hawkeye is annoyed by Trace's recklessness, but has no choice but to follow. The back-up story dealt with Pym, Striker and Finesse of the Avengers Academy being attacked by a bunch of robotic dopplegangers of the original West Coast Avengers. The trio manage to shut down the robots, but before they can celebrate, Pym is knocked out and the two Academy cadets are confronted by Alkhema(!!).

The Good: The back-up story was, once again, the best thing about this issue. Adding Alkhema to the equation simply made a great story that much greater! The main story had lots of Hawkeye, so that's good, right?

The Bad: I'm just not into the main story here at all... An evil organization has conducted experiments on some women with the hope being that the women would one day get pregnant and have super-powered kids? The fact that the story actually makes you think that MAYBE Cap WAS behind this organization was flat out bizarre! The scene with Cap and Hawkeye was obviously meant to make us suspect that Cap was possibly up to no good, but come on, who's gonna buy that?!

The Verdict: Just like the first two issues of this mini, this one had a mediocre lead story that was saved by a great back-up feature. Honestly, if not for that fact that Hawkeye was the star of the main story, I'm not sure I'd have bothered reading this one until sometime early next week. I'll mainly be picking up the next issue simply for the back-up story and to read Hawkeye's dialogue, because I just don't see myself ever getting into the main story here. 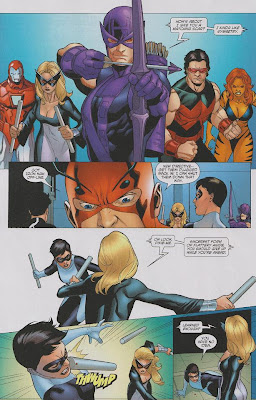 The only way this could have been better was if there was a robot Pym there in that awful red jumpsuit Pym used to wear...
Posted by x-man75 at 11:18 PM