So X-Factor got me back on track with a strong score. Now let's hope Wolverine continues the trend.

What Happened: Kingpin meets up with the head of the Japanese Yakuza in Central Park to agree not to mess with each other's groups. Those two Canadian cannibals(the Buzzard Brothers) start killing Yakuza goons, at which time the head of the Yakuza figures Kingpin had double-crossed him. As luck would have it, Wolvie happened to be in the area and rushes over, attacking the Buzzards. He is soon assisted by a trio of women, the leader of the group being the thought to be dead Seraph. Wolvie and the women(Marvel's next new series title perhaps???) manage to take down the Buzzards while spiriting Kingpin and the Yakuza head away. After making sure the head of the Yakuza had safely made it onto his airplane back to Japan, Seraph tells Kingpin that one of her girls interrogated the Buzzards and they claimed to be working for ninjas... Kingpin denies any involvement with the Buzzards and is soon escorted away from Wolvie and company by his Hand ninjas. This issue ends with Sabretooth managing to murder the Yakuza head by throwing him out of his private jet.

The Good: Wolvie's battle with the Buzzards was energetic and fun. The cliffhanger was somewhat interesting. The art was good.

The Bad: Yay, Wolvie is trapped between the Yakuza and the Hand... *yawn* I just don't care about Wolvie's Asian adventures. They've always bored me to tears. Sabretooth's big return was spoiled for me, oddly enough, in Wolverine and the X-Men #3. I mean yeah, I'd heard he was coming back, but having him appear in two comics, the very same week as his first appearances since his return seemed kind of weird. Especially since Jason Aaron writes both series! Speaking of Sabretooth, I'd rather we learned HOW he came back(which I believe we will next issue) before seeing him...

The Verdict: What can I say, I didn't really like this issue... Nothing here did anything for me. Wolvie stuck in the middle of the Japanese mafia while they go to war with the Hand pretty much showcases all of the things I like the least about Wolverine's origin. Now we'll probably end up getting months and months of Wolvie and Yukio, his “daughter”, and people throwing the word “gaijin” around... Wake me when this storyline ends. 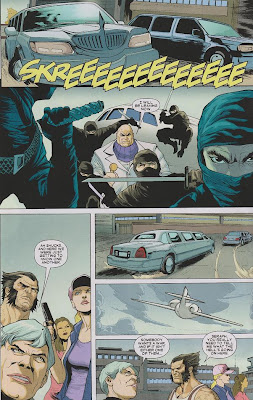 I wish Kingpin would have busted out a ninja pose here as well...
Posted by x-man75 at 8:30 PM