The first comic book review of this week is an easy one... This is the best mini-series I've read in ages, and depending on how things end up, it could wind up being my favorite mini-series ever. How's that for an introduction? So without further ado, here's the penultimate issue of Avengers: The Children's Crusade.

Summary: We begin this one with Dr. Doom now in control of the Scarlet Witch's reality warping abilities. Doom is happy about this fact(needless to say) and promises to use the powers to make the Earth into a utopia... Provided he was accepted by everybody as the Earth's ruler. Wanda tells Doom to return her powers since they would undoubtedly destroy Doom as they destroyed her, but Doom feels he's better equipped to deal with the power and disregards Wanda's words. Doom asks the Young Avengers if they would follow him, but they also refuse. Spurned, Doom sends the Young Avengers and Wanda back to where the X-Men and Avengers had been battling. The X-Men immediately attack Wanda and Emma Frost knocks Wanda out telepathically. The Young Avengers warn the two teams that Wanda was no longer a threat, and upon looking in Wanda's mind, Emma sees that Doom did indeed possess Wanda's powers. Lord Summers, even knowing that Doom was the real menace here, still wants the X-Men to take Wanda into custody to answer for all of her depowering of mutantkind, and all of the damage that rash act had caused. Wiccan sticks up for Wanda, trying to explain that her actions were a tragic accident, and that most of the X-Men and Avengers committed crimes before they had become heroes. Before the heroes can decide whether to listen to Wiccan's words or not, Doom appears on the scene and offers the X-Men and Avengers several boons(cures to various ailments, world peace, the return of dead friends/teammates), provided they accepted his “benevolent” rule. The assembled heroes natural say no to that offer, so Doom grows to an enormous size and engages the Avengers, X-Men and X-Factor in battle. Wanda asks for Wiccan's assistance, figuring the two of them would be able to create a spell that would force Doom's stolen powers back where they belong(I think...). Ant-Man joins the fray, figuring he could disrupt giant Doom's attention by flying into his ear, but he is seemingly squashed by Doom. Stature freaks out at that and grows to match Doom's size, flooring Doom with a punch. Doom retaliates with a massive blast of energy that sends Stature hurtling away from him. The rest of the Young Avengers join the fight against Doom, which allows Wanda and Wiccan to complete the spell, which opens a portal granting Doom more power. Doom continues to try to absorb the power, but it turns out to be too much for his body to hold, as the power burns Doom's face and body, leaving him back where he started, scarred and without Wanda's powers. Wanda tries to help Doom to his feet, but Doom pushes her away and seemingly takes credit for all of the evil acts Wanda did during Avengers Disassembled and House of M(??), before teleporting away. With Doom gone, Ant-Man regains consciousness and returns to normal size just in time to see all of the heroes tending to his critically injured daughter.

Thoughts: Well, first things first, I guess. This issue was probably my least favorite issue of this mini-series thus far. That's not to say that it wasn't still really good, it just didn't move me like so many of those early issues did. Maybe it's because most of this issue was just a big fight between giant Doom and the heroes, which robbed us of all of the awesome dialogue and character development we had been getting prior to this issue. Besides that, Wiccan and Wanda's actions were kind of hard to figure out... Were they trying to get the powers away from Doom and back to Wanda? Were they trying to get the powers away from everybody? Were they trying to force Doom to try to absorb more power than his body could handle? Were they going for something else altogether? I was never sure. Oddly, this series is kind of making me LESS interested in the upcoming Avengers vs X-Men event... I mean we're already GETTING the Avengers vs the X-Men in this mini-series, probably written and illustrated WAY better than we'll wind up with come this Spring. I would fully expect a perfect score for the next issue, because with the main battle already fought, we should get what made those early issues so fantastic, lots and lots of character interactions in the aftermath of this one. Will Wanda have her powers? Who will take her, the X-Men or the Avengers? Did Ant-Man return to life just to watch his daughter die? What of the Young Avengers? Will they end up back in limbo, or does Marvel FINALLY have plans for these wonderful characters? So while this issue didn't blow me away, I'm already expecting the final issue to be one of the best comics of 2012! 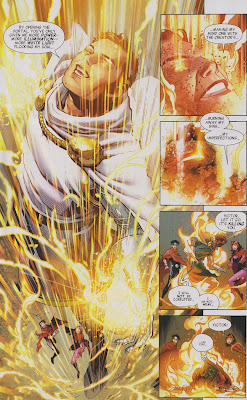