For the rest of the week, due to the sheer number of comic books I have to get through, as well as Christmas, I'll be reviewing all of my comics, Marvel, DC and otherwise, using the good/bad/verdict format. I'm sure most of you guys don't care, but I figured I'd put that out there. Anyway, next up for the night is the latest issue of Daken, a series that is slowly marching towards the end. I've got to say, this series really fell apart when Dan Way and Marjorie Liu left. Rob Williams started off well, but the drug storyline was just the wrong way to take the Daken character, in my humble opinion at least... Oh well, let's see how things shake out this issue.

What Happened: After an initial misfire, Daken manages to convince the Runaways that Marcus Roston was related to the Pride in some manner. After listening to Daken for a bit, Chase realizes that Roston was his “creepy Uncle Eli”, a guy the Pride wouldn't allow to join them since he was insane. Figuring Daken to be the good guy and Roston to be the bad guy, the kids agree to assist Daken... But after Daken leaves they decide to see what they could dig up on him... From there, Roston grows tired of being a movie star and wanders away from his movie set crying... Daken heads off and finds FBI agent Kiel, who was contemplating leaping off the LAPD administration building to stop her addiction to the Heat drug Roston concocted. Daken talks her off the ledge(the hell?!), saying that he saw a lot of himself in her(really now...). Roston floats over and uses his still unexplained powers to kill everybody in the LAPD building before turning his attention to Daken on the roof. Roston moves in to finally kill Daken, but is halted by the Runaways, who arrive on the scene to assist Daken in his hour of need.

The Good: Daken plus the Runaways is definitely a good thing. Williams explained away that whole idiotic, “Chase was run over by a car!” that ended the last Runaways series by simply saying that Chase had been in an automobile accident and got better... Now let us never speak of that last Runaways series again... Due to the impending cancellation, we're FINALLY going to get to the end of this Roston/drug storyline. Thankfully.

The Bad: Williams just never seemed to “get” Daken... Getting addicted to drugs, losing control of himself, his strange infatuation with Kiel, it all runs counter to what Way had done with Daken through Origins, Dark Wolverine and this series... It may be a little thing, but Victor was drawn wrong(what was with his hair?) and didn't have enough lines.

The Verdict: Eh. Daken may be one of my favorite Marvel characters(I was PSYCHED to finally get his card in UMvC3 earlier today!!), but there's a part of me that's actually happy about the impending cancellation of this series... As much as I love the guy, I think Daken needs to go off, lick his wounds and come back a few months from now, giving us the time to forget these last several issues ever happened. 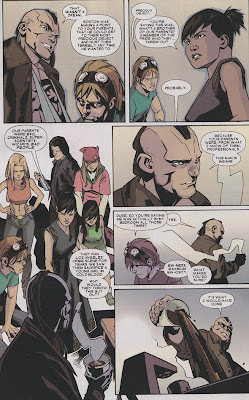 How about a Daken and the Runaways series, Marvel?
Posted by x-man75 at 8:30 PM