The last comic to be reviewed in my new comic pile? This week's Runt of the Litter, Avengers #20. I am SO not looking forward to reading this... I mean I was actually considering reviewing this issue using Brightest Day Rules... THAT'S how much I expect this one to suck! Seriously, I am expecting the absolute, total and complete worst here... PLEASE prove me wrong, Bendis...

What Happened: We start off by learning that it wasn't actually Norman Osborn confronting the Avengers at their press conference, but a hologram of Osborn. Red Hulk ends up getting rid of the hologram before Iron Man can trace the signal, which means the Avengers have to try to find Osborn and his HAMMER lackeys the old fashioned way. With that, Captain America splits the team into a four groups and sends them out to various old Osborn haunts. Naturally, all four locations are traps, and this issue ends with the Avengers on the defensive.

The Good: After we got past the complete stupidity of Osborn and Viper as well as Osborn and the press conference, this was a pretty solid story! The Avengers were ambushed on four fronts, all but one of the traps making pretty good sense. For a change, I'm actually looking forward to the next issue of this series.

The Bad: Iron Man being corrupted by HAMMER and/or AIM probably shouldn't have happened... I'm pretty sure Tony Stark's technology is heads and shoulders better than AIM's. The beginning of this issue was Bendis at his worst, especially the utterly pointless conversation between Osborn and Viper. No matter how much he wants it to be otherwise, I just can't take Norman Osborn as a serious threat to the Avengers... Spider-Man? Sure. But Earth's Mightiest Heroes? Nope.

The Verdict: The good here definitely outweighed the bad, so huzzah for that. This issue turned out to be a very pleasant surprise, as I was expecting a comic so bad I'd be using negative numbers to score it. Was it perfect? No, of course not, but it was WAY better than what we've been getting from this series for the past 8 months or so. So for that, I have to say I am happy. Hopefully Bendis will wrap up this Osborn story and get back to the relatively good stories we were getting back when this series relaunched. 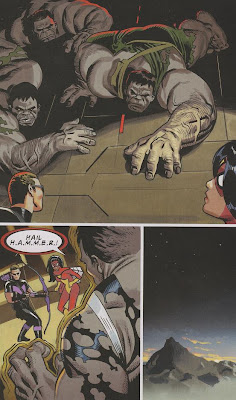