Next comic on the agenda is the first DC book in my new comic pile, Nightwing... I was thisclose to reviewing this comic with Brightest Day Rules, mainly because of that damned Barbara Gordon appearing in this one... I hate her with a passion that is bordering on scary, so expect A LOT of hate for a character who was, at one time, amongst my favorite female DC characters...

What Happened: Alright, I'm going to be straight with you guys here... I didn't read this comic. Like at all. I basically looked at the pictures. Seriously, that goddamn Batgirl was on nearly EVERY PAGE!!! So to save myself from a massive brain hemorrhage, I skipped this one. All I can tell you is that in the end, after that usurpering hag finally left this issue, Dick found a hidden book with his name in it. Do I know why he went looking for the book? Nope. Do I care? Right now? Nope.

The Good: Um, Dick is still having sex with Raya... I guess that's good for him, right?

The Bad: This was basically an issue of Batgirl, which stars a character I refuse to read about...

The Verdict: Um, yeah, sorry about the lack of a review, but as I said, I refuse to read anything with this version of Batgirl in it, and this issue was no exception. Maybe if she wasn't on practically every page, I could have given this issue at least a semi-read. But as it is, I couldn't read a damn thing. If Kyle Higgins wants to write Barbara Gordon so bad, maybe he shouldn't be writing Nightwing. 'nuff said.

Score: 0 out of 10. Here's hoping this is the final imperfect score of the year... 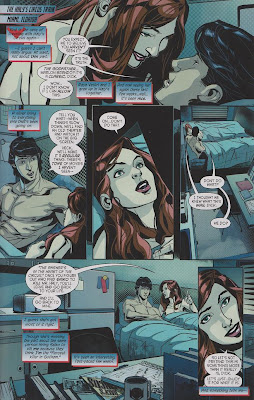