What Happened: While taking some blind kids on a trip to the Catskills for Christmas, the bus Matt Murdoch(Daredevil!) was riding in ends up crashing, killing the driver and stranding DD and the eight blind kids. DD keeps up a brave front and tries to lead the kids to safety, but the inclement weather ends up wreaking havoc on DD's radar senses and he ends up falling down a hill and knocking himself silly after hearing a truck off in the distance. Luckily for DD, the eight kids build a makeshift gurney(!?!) and drag him through the snow to an abandoned house where DD could call the cops from. With that, everybody is safe and sound(except for the poor bus driver, who's dead!) and we end this issue happily.

The Good: Until the UBER-hokey ending, I was enjoying this issue. Mark Waid built a great sense of dread here and had me honestly wondering how DD would get out of this one(especially since his clothing had been torn and his DD costume was exposed). The art was solid. I enjoy the occasional one and done comic book to break up all of the 5 and 6 part storylines I'm constantly reading.

The Bad: As I mentioned above, I was thoroughly enjoying this issue until that ending... I get this was supposed to be an uplifting holiday issue but ugh... The kids not only get DD to safety(where he can steal some clothes to hide his DD attire), but they also build a gurney out of sticks!? There's a bit of a cliffhanger depicting a graveyard, but it didn't exactly get me psyched for the upcoming Spidey/DD x-over.

The Verdict: This was a good comic. If there would have been a better ending, I'd probably go so far to say this was a really good or even great comic. But alas, it was not to be. Don't get me wrong, I totally get what Waid was doing here(show that the kids weren't helpless even when the super-powered adult was), but blind or not, what 8-12 year olds(which is where I'm guessing these kids fell age-wise) are going to have the wherewithal to build a gurney and drag their mentor to safety after he's injured himself?! Hell, if I was one of those kids I'd be long frozen to death, not creating stuff out of sticks! Then again, I was a really dumb kid... Eh, regardless, that ending was a bit too sugary for my taste. This is a series that's right on the fence in terms of me dropping it... Most likely I'll stick around for the Spidey x-over and then say so long to ol' Hornhead. 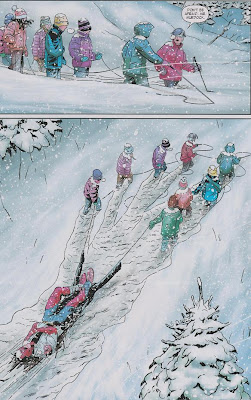