Second comic of the week? Another series written by Rick Remender. Obviously I must really enjoy his work since his books are usually towards the top of my comic pile, but did I enjoy his work enough this year to name him as my favorite writer of 2011 in my year end awards? Don't worry, you'll know in a few more days...

Summary: So Venom is now AWOL from the army as he's taken the symbiote and gone cross country to retrieve something Crime-Master wanted him to pick up in Las Vegas... What is that something? Well, therein lies the problem. Venom doesn't know. Upon heading to a hotel, he is met by his self-proclaimed archnemesis, Jack O' Lantern. Jack tells Venom that Crime-Master wanted the two to work together to retrieve the mystery something from Vegas. With no real choice(Crime-Master knows Venom's secret identity and as such has sworn to kill everybody he knows if he were to disobey), Venom is stuck with the delightfully insane Jack. The two end up learning of a mine collapse while driving along, and save most of the trapped miners, with Jack shooting and killing a miner who was critically injured, since his friend wouldn't leave the injured miner's side. Naturally, Venom is pissed but can do nothing in retribution since killing Jack would lead to Crime-Master killing Venom's loved ones. From there the two go to a roadside diner where Jack regales Venom with a tale of his childhood, at which time we learn Jack was abducted as a child by Crime-Master and basically raised to be a psychopath. Before the two leave the diner, Jack murders the cook and waitress inside without Venom's knowledge. Besides that, we have Eddie Brock acting like an uber-religious nutjob, deciding he had to eliminate all symbiotes, and Captain America sending the Red Hulk after Venom(since both Cap and Red Hulk were members of the army, and Venom going AWOL was an army problem).

Thoughts: Now THIS was more like it! After how disappointing Uncanny X-Force #19 was, this issue restored my faith in Rick Remender! I really have no qualms about this comic... I guess I could complain about Venom acting very unheroically by allowing Crime-Master to send him cross country with a murderous psycho, especially since Flash could turn to the Avengers or Spidey for help protecting his loved ones, but doing that would also cost him the Venom symbiote, which he's now realized he's addicted to, so Venom's actions here make sense. Speaking of making sense, the Cap/Red Hulk cameo made perfect sense in light of the two both serving in the army. I didn't really like the Eddie Brock cameo since Eddie has seemingly reverted to a one-dimensional religious crazy. But overall? This was a highly enjoyable comic. 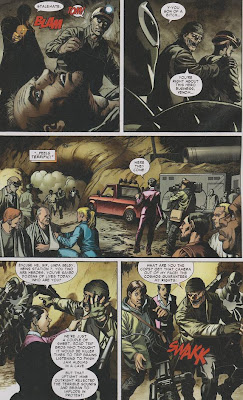