Ah yes, Supergirl... This is a comic book that's been written well, has good art and everything, but doesn't have a lead character that's really overly appealing to me... This version of Supergirl just hasn't grabbed me yet, and three issues in, that's not a good sign. The writing team here has done a great job highlighting SG's plight, but hasn't made her exceptionally likable(or unlikable for that matter)... Oh well, let's get to this issue and see if that changes.

What Happened: A guard on Tycho's space station takes pity on Supergirl and releases her from the Kryptonite room she had been locked in. With cameras everywhere, Tycho realizes what had happened and before the guard could reach the escape pods, Tycho and his security detail appear in front of SG and the guard. Tycho has the guard killed, which infuriates SG since he was the only person to show her kindness since coming to Earth. Tycho orders his guards to recapture SG, but being away from the Kryptonite, and being so near the sun helps her power back up and trounce Tycho's goons. Tycho retreats to his control room and when SG arrives, he shows her a Sunstone that had been found in the pod she arrived on Earth with. Tycho offers SG the Sunstone in exchange for a single drop of her blood, but SG can't understand a word he is saying and blasts a hole through the floor, hitting the central core of the space station. With Tycho distracted, SG rushes over and grabs the Sunstone before exiting the station, confident the people inside would manage to escape via the escape pods. However, Tycho stays behind in a desperate attempt to repair the damage and ends up blowing up with the station. Outside, SG realizes that the Sunstone had been damaged in the struggle, and wonders what to do next. This issue ends with Tycho, now just a head and torso, but alive due to his people and his wacky science experiments, spotting some of SG's blood on the shirt of one of his men and realizing that he got what he wanted after all.

The Good: Again, the story and art was strong. We got a tiny little bit of character development with SG, as she saw that not all humans were evil and out to harm her. Tycho stole the show again, and I have to admit that I'm happy to see that he's still alive. Now just clone him a Kryptonian body and we're set.

The Bad: SG still doesn't understand any language except Kryptonian, and has no idea what to do with herself from here. While the sense of confusion has been perfectly executed these past 4 issues, we still haven't gotten much character development for SG. Is she virtuous like Superman or is she borderline psychotic like Superboy? We still don't know.

The Verdict: It's funny, I can pretty much pencil in a score of an 8 or higher before I even open an issue of this series, and yet I'm still considering dropping the title... After reading this issue, I can say I will definitely be sticking around for issue #5, but past that? Who knows. That's probably the biggest negative for DC concerning their reboot... It's SO damn easy to drop a series. Pre-reboot, I'd be more willing to stick it out with a series since the characters were more developed due to DC's long history. But post-reboot, since DC threw away it's history and started from scratch(pretty much), I just don't have that same bond with any of the characters... 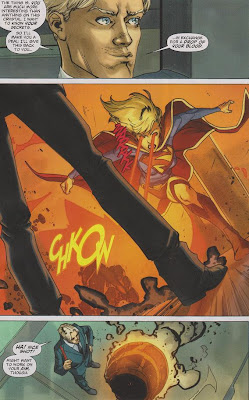