Alright! Here's a comic I've been looking forward to reading since the last issue came out! Oddly enough, taking the title character OUT of the series made it 100 times more enjoyable for me... Weird. Anyway, this issue should have a HUGE Allen the Alien/Nolan showdown, as well as Oliver, who along with Cecil Stedman NEED their own series!! Enough intro, let's get to it.

What Happened: Quick reminder of the events of the last issue... Allen has revealed to Nolan that the Coalition had managed to perfect the Scourge Virus, which is one of the few things that could kill a Viltrumite. With all of the remaining Viltrumites in the universe hiding out on Earth, Allen plans on releasing the virus on Earth, which would eliminate the Viltrumite menace once and for all. The problem? There's a good chance the virus would also kill every human on Earth since their DNA was so similar to Viltrumites. Allen sees this as a risk worth taking, while Nolan thinks that potentially wiping out the entire human race is the wrong way to deal with his people... This issue opens with Nolan and Allen taking their battle into outer space so as to not damage/kill anyone on the Coalition homeworld. Allen gains the initial advantage, but Oliver soon joins the battle and attacks Allen to aid his father. Before the two can really take advantage of Allen though, a mess of Coalition soldiers appear on the scene. With the soldiers momentarily preventing Nolan and Oliver from attacking, Allen again tries to reason with Nolan, telling him that a) it wasn't 100% guaranteed the virus would kill humans, and b) even if it did, those billions of deaths would prevent several billion more in the future. Nolan counters by saying that living on Earth changed him from being one of the most hardened of Viltrumites to somebody who was willing to stand against his conquest hungry people. In Nolan's eyes, the longer his people lived amongst the humans, the more likely they'd turn out like he did and recant their ways. After hearing both side, Oliver sides with Allen and the Coalition over his father and declares that if the death of all humans was what it took to rid the universe of the Viltrumites, so be it. Seeing that Nolan wasn't going to change his mind here, Allen tells his soldiers to restrain Nolan so he could get his mission over with. Nolan knocks the soldiers around and makes a move towards Allen, but is stopped by Oliver, who slugs his father. Nolan goes to attack Oliver, but can't bring himself to strike his son. With that, Allen attacks Nolan anew which leads to a battered and beaten Nolan retreating. Allen lets him go and asks Oliver to accompany him to Earth since it was almost assured that Invincible would be as bullheaded as Nolan was. This issue ends with Nolan returning to his wife Debbie to tell her that they had to get to Earth to warn Invincible, before collapsing.

The Good: Um, everything? Seriously, there wasn't a dull moment in this comic. Every page, every scene, every piece of dialogue was just perfect here. Not only that, but the story itself is full of so much gray! You can EASILY understand the argument both Allen and Nolan were making, and could see why Oliver sided the way he did.

The Bad: Nothing I can think of...

The Verdict: Yeah, this comic was perfect, no question about that. I love stories that aren't totally cut and dry, and this one fit that bill completely. It's rare when a comic book can actually give you a story where you can easily see both sides of the argument presented. Usually in a comic book when you are presented with an argument that is supposed to be shades of gray, it's STILL easy to see which side is “right”(I'm looking squarely at YOU, Civil War!)... If you want to know which side of this argument I fall on, it really wasn't that difficult of a decision for me to make... I am fully on Allen's side here. Yep, I'd be willing to potentially kill all life on Earth in order to save future generations from the horrors of the Viltrumites. I totally get what Nolan is saying here(that the Viltrumites may soften as he did and no longer threaten the universe with enough time spent on Earth), but what if Nolan WAS an aberration to his people? What if the rest of the Viltrumites DON'T soften their stances and DO go through with their long range plan, which would be to have children on Earth. Children who would eventually grow up to help the Viltrumites conquer the universe? Then again, what if Nolan ISN'T an aberration and living on Earth, living as a human, DOES change the Viltrumites? See, it's NOT that clear cut. But for my money? If I were in Allen's position, hoping the Viltrumites change isn't worth the risk. So yeah, needless to say, I can't wait for the next issue as the Coalition forces begin their move towards the Earth... 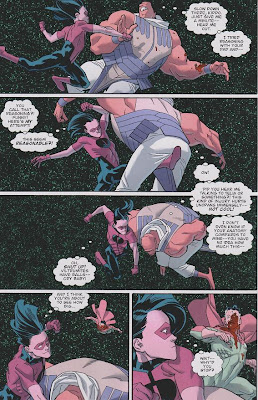