Magneto has always worked best, for me, as a villain. Not as a shades of gray type of character(CLAREMONT!!!), not as a hero(CLAREMONT!!!), but as a tried and true super-villain. A guy who is willing to do ANYTHING to promote his own agenda. I was hoping this mini-series would give us evil Mags, but instead we're getting the return of Magneto's ill-fated clone, Joseph, as the villain of this piece. But what can ya do? I guess I'll sit back and enjoy evil Joseph-Mags, while Mags continues to play good guy...

Summary: This issue begins with a ultra short explanation of how Joseph came back... That's a welcome change of pace actually... Astra(the one behind the utter mess that was the Joseph-Magneto shambles from the 90's) basically plucks Joseph out of the magnetosphere and brainwashes him, giving him Magneto's memories. See, simple. Mags is tracking Joseph as one who is in tune with the magnetosphere would be able to do, and ends up finding Joseph and Astra at an abandoned steel mill. Joseph basically wants to talk with Mags, since he's curious as to what Mags master plan was concerning the X-Men. Mags tells Joseph that there WAS no master plan, and that he was doing what he thought was best for mutantkind(being Lord Summers bootlick?!), which was what he always did. Mags also tells Joseph that Lord Summers had turned out more like Magneto than Prof. X, at which point Joseph realizes that all Mags really wanted was to rub in Xavier's nose the fact that Magneto had gained the favor of Xavier's most trusted student(which is an awesome point). Mags warns Joseph not to push it, since Mags was the genuine article and Joseph was simply a clone. Enraged to hear that, Joseph smashes Magneto, sending him careening into the ground. When Mags regains his senses, he is shocked to see that he was being attacked by not only Joseph, but Blob, Quicksilver and the Scarlet Witch(!). There was also some stuff with a bigot selling Magneto t-shirts in order to promote his anti-mutant agenda, but as is my prerogative, I'm going to ignore all of that until it leads to something.

Thoughts: I'll be damned, I really enjoyed this issue! First off, kudos to Skottie Young for the way he brought Joseph's back. The moment I saw Astra my first impulse was to throw the comic across the room in order to save myself from the massive confusion and bad stories associated with her... Really, Astra and her role in Joseph's original creation was some braincell killing stuff! Just thinking back on it causes me great mental anguish! Instead of flinging the comic away, I decided to read on, and was really impressed with Joseph's return. Instead of some insanely convoluted story involving dogs talking in numbers, multiple evil versions of the same character, reality punching or any similar idiotic plot device(all of which HAVE happened!), Young simply said, “Astra used her scientists to find Joseph and reincorporate him. Then she forced Magneto's memories into his head.”... Simple and logical. Besides that, the dialogue was exceptionally well done. For a guy who has spent his entire career as an artist, Young's writing here has been a revelation thus far, especially considering how terrible certain artists have been when they start writing(coughTonyDanielcough). I didn't really get what the deal was with the bigot with the Magneto shirts, and yeah, I guess we could have used some more action here, but that's what the cliffhanger is for, getting us excited for the next issue, which should be action packed. 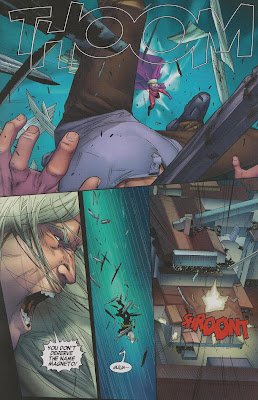 Is “Magneto” really such a great name that people are willing to fight over it?
Posted by x-man75 at 8:00 PM