Red Hood and the Outlaws #4

Well, this comic can't be as bad as the first DC book I read tonight... At least I hope not!!

Red Hood and the Outlaws #4:

What Happened: While Red Hood and Arsenal are battling against a member of The Untitled(who I'm still a bit foggy on...), Starfire is attacked by a big green guy named Crux. During the fight, Crux reveals his origin story(as any good super-villain should), which is basically that a Tamaranean warship crash landed on his parents and killed them, causing him to devote his life to destroying any Tamaraneans who came to Earth. The two battle for a while, but Crux realizes that he can't defeat Starfire and seemingly goes to escape... Or does he?!? In actuality, Crux leads Starfire to a massive Tamaranean... um, something, and the... um, big Tamaranean thing does something not so good to Starfire. Crux smugly tells Starfire that she was now human(or something) before leaving. As for Hood and Arsenal, they basically only manage to piss off The Untitled which leads to the duo beating a hasty retreat. It's at that time Arsenal spots the explosion from Starfire coming in contact with that big Tamaranean thing. Arsenal wants to go to help Starfire, but Hood knows he has to stop The Untitled, so the two split up, with Arsenal going to check on Starfire and Hood remaining behind to battle against the powerful Untitled on his own.

The Good: I'm always happy whenever I see Starfire get smacked around. Sorry folks, I don't like her. Roy Harper and Jason Todd were in this issue, so that definitely equals good to me. I really like the artwork in this series... The cliffhanger was a good one that has me interested in the upcoming issue. Crux is a character I wouldn't mind seeing again.

The Bad: I STILL don't fully get what the hell is going on with the All-Caste and the Untitled... While I enjoyed all of the fight scenes and stuff, I just don't get what the deal is with the main story... If Jason kills this Untitled, then what? Does that mean he avenged the All-Caste? Does he continue going around killing the rest of the Untitled? I just don't get it...

The Verdict: Even though I don't get the main storyline here, this WASN'T a terrible comic book... I enjoyed the fight scenes, I just don't get what the mission here is... While Teen Titans and Superboy are slowly starting to come together and make sense, Scott Lobdell hasn't grabbed me yet with this series. But that's cool, as a huge fan of Jason, I'm here for the long haul. Whether I know what's going on or not! 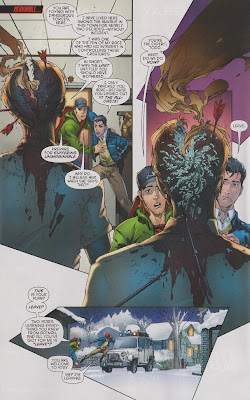 I can tell you from past experience that a sight like that is NEVER a good thing!
Posted by x-man75 at 9:00 PM