Next(and last) review for today? Deadpool! I don't know about anybody else, but I've been LOVING this Deadpool vs Evil Deadpool story thus far. Here's hoping it continues to be as good(and hilarious!) as it's been.

Thoughts: Meh. This comic was okay, but we didn't get any Deadpool on Evil Deadpool action, thus hurting my enjoyment of this one. Sure, Evil Deadpool and Deadpool are fun on their own, but together they are pure comic book gold! But sadly they were never together here. The story was solid, but the hilarity that had marked the previous few issues wasn't here, and as I've stated before, one of the main things I expect from a Deadpool comic is a few good laughs, which, to me at least, is the most important thing about an issue of Deadpool. Oh well, here's hoping we get the mammoth Evil Deadpool/Deadpool showdown next issue. 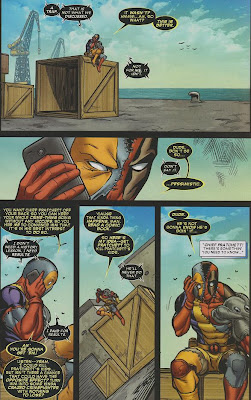