Huh, this isn't exactly what I'd call a very Christmas-y sort of comic... Oh well, that's the way the new comic pile shook out, so here comes a very Constantine Christmas!

What Happened: We get started with Constantine destroying Tamsin's book of demons as a way of telling her to stay the hell away from his niece. From there Constantine learns from his father-in-law(and all around scumbag), Terry Greaves, that some mobster was sent over from New Jersey to murder Constantine as a result of Constantine accidentally killing two other mobsters from NJ. As for the mobster sent to whack Constantine? He is Toni Gisulfo, who is currently in possession of Constantine's possessed coat. Toni murders the coat's former owner(a girl named Georgie), and Constantine hears from his cabbie friend about a girl(Georgie) who was ranting about a possessed coat. Constantine heads to Georgie's place and is confronted by Toni and his angry coat. Constantine manages to sweet talk the coat, telling it he never intended to be separated from it, so it murders Toni and Constantine takes the coat back... Huh... Anyway, with the mob and coat business taken care of, Constantine and his wife return home and are horrified(disgusted?) to find Constantine's niece and his father-in-law having sex on their couch. Terry leaves and Constantine's niece tells him she only did it to hurt Constantine. Constantine's niece continues, telling him that if he went to Hell to see if her mother really belonged there she'd stop seeing Terry. Stuck between a rock and a hard place, Constantine readies himself for a trip to Hell.

The Good: The parts with the coat were, as usual, great. Everybody around Constantine were portrayed perfectly scuzzy... His father-in-law, his niece, they were all just wonderfully horrible to Constantine. The end of this story and the promise of the next one has me excited for what's to come.

The Bad: I really hate Constantine's niece... If ANYBODY should end up in Hell, it's HER! The reconciliation between Constantine and his wayward coat seemed kind of anti-climatic. All of this build-up for Constantine to sweet talk the thing?!

The Verdict: Eh, this was a perfectly acceptable comic. Nothing more, nothing less. Oddly enough, even though it concluded a storyline, it seemed to spend more time setting up the next storyline. I was expecting major fireworks when Constantine met his coat again(there's a line I never thought I'd be typing...), but instead of fireworks we got sparklers. Oh well, maybe we'll get those fireworks come the next storyline. 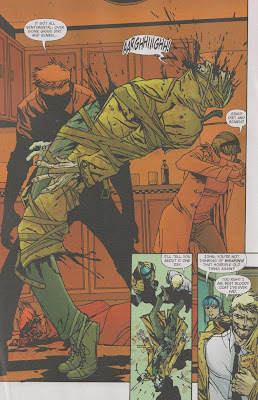