Next up is Superboy. You can almost guarantee that the sucky comic reading streak is going to hit 6 here, as I really haven't enjoyed any of the first three issues of this series. Please surprise me here, Scott Lobdell!

What Happened: Before Red can pulp Superboy for breaking into her room, a bunch of NOWHERE goons led by a guy named Centerhall come in, knock Red out and take her away. Centerhall tells SB that Red was a terrorist who was undermining NOWHERE from the inside, before telling SB that he wanted to work with him. To that end he tells SB everything he knows about his creation(not a whole lot), gives him a card that would allow SB to contact him, and allows SB to leave the NOWHERE facility to live on his own. SB wanders around acting all pissed off at people and setting the Rockefeller Center Christmas Tree alight, before noticing two teenage criminals tossing some guy out of a window. SB saves the guy which angers the two criminals, who attack SB. SB manages to defeat them with little trouble, and feels good afterwards. Liking this new feeling, and realizing that NOWHERE was correct in saying that teenagers with powers needed to be controlled, SB gets in touch with Centerhall and tells him that he'd go after Wonder Girl and the Teen Titans like NOWHERE wanted.

The Good: Superboy, while still mainly unlikable, gave off a bit of an early X-Man-ish sort of vibe in this issue, which is something I really responded to. I liked that NOWHERE decided to offer Superboy the carrot(Centerhall) as opposed to the stick(Templar), because it was obvious he was never going to blindly follow Templar, so the change in strategy was a smart move. Red mentioning that she had thirteen allies is an obvious nod to Gen13, which I'll be looking forward to seeing pop up down the road.

The Bad: While I liked SB a bit more in this issue, he was still by and large unlikable. Yeah, he saved people, but he also set the Rockefeller Center tree on fire. I don't think the teenage villains were ever mentioned by name here, which was kind of weird... The fight scene went by too quickly, although that's a really mild complaint.

The Verdict: Huh, who'd have believed that THIS comic would be the one to finally pull me out of the comic book doldrums?! Seriously, there was way more that Lobdell did right than he did wrong here, so I honestly have no major complaints. Believe me, I'm as shocked as anyone! 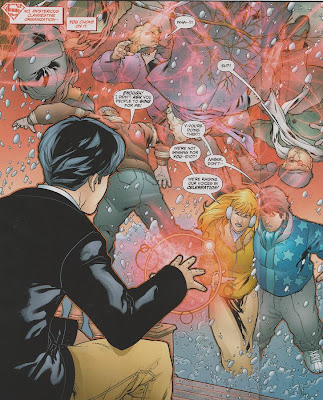