Wolverine and the X-Men #3

One more review for the night, the third issue of the Wolverine and the X-Men series. This series has been pretty good thus far, but I've got to say, the art has been very hit or miss... If the art were to stabilize, this series could possibly be among my monthly favorites.

Wolverine and the X-Men #3:

Summary: Wolvie and company manage to take down Krakoa(actually an artificially grown grandchild of the original), thanks to Kid Omega lending a hand in a clandestine sort of way... Yep, school troublemaker and renowned terrorist Kid Omega manages to get into Kid Krakoa's head and convince it not to attack the school anymore, which actually leads Kid Krakoa into asking Wolvie and company to join the school... Yeah... With that menace taken care of, Beast manages to restore the two NYS school board officials to their normal selves and then smooth talks them into allowing the school to stay open. From there, Wolvie has Matt Murdoch(that would be Daredevil to the uninformed) sue Kade Kilgore(the leader of the baby Hellfire Club) for damages to the school since the attack was directed by Kade. As revenge for that, Kade hires the suddenly alive again Sabretooth to make Wolvie's life a living hell, something Tooth is an expert at.

Thoughts: Well, so much for this being amongst my favorite series! Seriously though, this issue was a major step back for me. The fact that Kid Omega is ALREADY beginning to turn into a good guy really left a bad taste in my mouth here. I have no idea why he decided to stop Kid Krakoa from eating the school, Wolverine and everybody else, and make good on his own escape... Maybe he has an evil, nefarious plan up his sleeve? Hopefully?? On top of that, the school board officials suddenly forgetting the last 24 hours and giving an obviously demolished school their seal of approval was also kind of dumb. Add Sabretooth's appearance here(he hasn't even officially returned yet in the pages of Wolverine!), as well as the STILL unexplained mini-Nightcrawler clones running around and you have the recipe of a comic I just didn't enjoy all that much. Oh well, better luck next issue I guess... 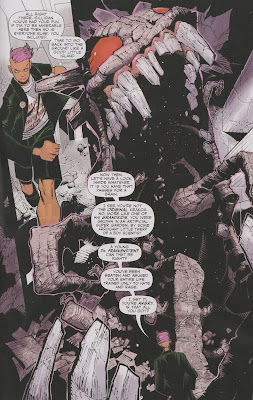