Closing out this Friday night? The Batman! I always got a kick out of people calling him “The” Batman... That be like “The” Spider-Man! Or “The” Superman! Strangely enough, Bats is just egomaniacal enough to make “The” Batman work... Well, how's that for an odd introduction!?

What Happened: The Batman manages to escape from the trap sprung by the Court of Owls last issue and heads back to the Batcave to lick his wounds and play with the skeletal remains of his dead great, great-grandfather. Alan Wayne(that would be the previously mentioned great, great-grandpappy) seemed to believe there was a Court of Owls running around Gotham, and after analyzing Alan's bones, Bats realizes that Alan had been tortured prior to his death, something that nobody picked up on back in the day. Nightwing stops by to see how Bats is doing, and Bats tells him a story about how as a child Bats looked into the Court of Owls, since baby Bats thought the Court had a hand in the deaths of his parents. After a long search that saw baby Bats get locked in an abandoned building for a week, baby Bats concluded there was no Court of Owls. Nightwing tells Bats that maybe he missed something as a kid, but Bats responds by stating that he had looked in on the Court of Owls rumors occasionally and never found any evidence. After finishing up his examination of Alan's bones, Bats heads to the sewers, which was where Alan's corpse was found and begins to look around. Unfortunately for Bats, that creepy owl guy(Talon I guess?) sneak attacks him and knocks him out cold. This issue ends with Bats waking up in a massive maze with a bunch of weirdos in owl masks watching him from a screen... Holy deathtrap, Batman!!

The Good: I still like the idea of a secret Court of Owls running around Gotham. The owls and Talon have really good villainous looks to them. The cliffhanger was interesting, as Bats finally comes face-to-face, in a manner of speaking, with the Court. I like Dick operating out of Gotham again since it gives him a reason to pop up in this series from time to time.

The Bad: I hate to say it, but this comic was pretty boring to me... The LONG story about baby Bats just didn't do it for me. And since that story made up a majority of this issue, that was bad news for me!

The Verdict: If you took out the middle 8-10 pages of this comic, it wasn't that bad. But I just never got into Bruce's flashback tale. I'm sure a lot of people enjoyed it, but for me it was just kind of time-wasting... But your opinion of this issue will definitely be decided on that flashback, so for me, this issue was a letdown. 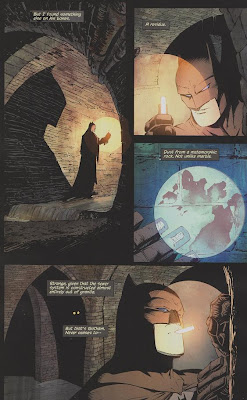