Okay, the past few days? I've been reading some lackluster comic books... It's been quite depressing actually. But today is a new day, and I am optimistic that the two books I review tonight will buck the trend and provide me with some comic book awesomeness! Now, let me take a look at what's on tonight's agenda... Oh. Hmm... This isn't going to be pretty...

What Happened: Nobody shows Batman and Robin a film about Gotham's criminals, with the moral of the film being that killing these scumbags would do Gotham a world of good. Batman won't do it and Robin is a captive audience... Get it? Because he's tied up!!! Trust me, that's about as much fun as we'll be having with this review... Anyway, Alfred shoots at Nobody with a remote controlled Batplane(Yes, really. And with rubber bullets), which drives Nobody away and allows Bats and Robin to get free. Later at the Batcave, Alfred is sewing Bruce up while Damian bitches about... Well, everything. The bottom line is that he feels Bruce should treat him more like an equal, but Damian hasn't done enough to earn Bruce's trust yet. Damian storms outside to bitch about Bruce to his grandparent's gravestones(which are shockingly minimal! Damn Bruce, you're a billionaire! Couldn't you buy your parents some nice looking tombstones or something?!). While there, Nobody pops up and tells Damian to join him on the dark side, since he wouldn't force Damian to tone down his murderous instincts. Nobody then leaves and Damian ponders things.

The Good: The art was good. I enjoyed Damian(as usual) and laughed when he was telling his grandparents that they raised a stubborn ass...

The Bad: The story here just isn't doing it for me... I mean it's not awful, but it's not that good... I'm already tiring of Bruce and Damian arguing every single issue. Honestly, if they wanted to have an angsty Robin for Bats to contend with, then they should have upped Damian's age from 10 to 13 or so with the reboot. A 13 year old Damian being the moody teenager would have fit better than a 10 year old one. I think I'm already tired of Nobody... The whole film scene was dumb.

The Verdict: Yep, the sucky comic reading streak lives as we reach 5! I just never got into this issue. It started slow, consisted of Nobody telling Bats(and Damian) that he should kill his foes, had Alfred(of all people) rushing in to save the day, and ended with Damian being all moody. The more I think about it, the more I feel Damian should have been aged a few years post-reboot. Especially since he's always yelling at Bruce and acting sullen. So far Peter Tomasi hasn't been able to find the right formula to make Batman and Mini-Batman work as a team. If every issue is going to be like this one(and let's face it, the first four issue all involved Bruce and Damian arguing), why bother reading the rest of the series? I could probably do reviews just by looking at the covers! 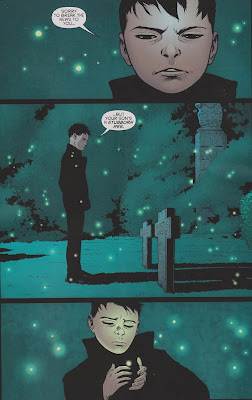