First review for the week? That honor goes to Uncanny X-Force #19. Sure, the last issue came out JUST last week, and the long-running Dark Angel Saga ended with more of a whimper than a bang, but out of all of the books I picked up this week(21 in all!), this was the one I was most curious to get to, which says a lot for Rick Remender's writing prowess.

Summary: Fantomex tells Kid Apocalypse(from this point forward, Genesis), that he couldn't return to his home or parents(which was a virtual reality utopia), and that he'd be attending Wolvie's school. Genesis isn't happy about leaving behind his family and life, but seems willing to listen to his “Uncle Cluster”. Wolvie and the rest of X-Force head to Gateway with the Age of Apocalypse X-Men to send them back to the AOA, all except for AOA Nightcrawler, who decides to remain in the 616 Marvel Universe in order to hunt down the AOA refugees(Sugar Man, Dark Beast, AOA Iceman, AOA Blob) who were still hiding out in the 616. Psylocke tries to see if there was anything left of the Warren Worthington she loved, but is heartbroken to discover that he was totally devoid of his former memories and feelings. With a younger clone of Apocalypse heading to his school, Wolverine brings Beast and Kitty Pryde to X-Force's hideout and comes clean to them about the existence of X-Force, as well as the truth behind Genesis. Beast is pretty pissed about Wolverine secretly keeping a hit squad behind his back, but Wolvie manages to smooth things over... Kind of... From there, Wolverine decides that X-Force would now be responsible for keeping his school safe(really?! You put DEADPOOL in charge of campus security?!), and Fantomex is assaulted by Captain Britain who babbles something about making Fantomex pay for what he's done to Psylocke.

Thoughts: This issue was a big old pile of meh for me. The only real saving grace for me was the conversation between Beast and Wolverine. Everything else just didn't do a thing for me. Add the fact that the next storyline involves Otherworld(a terrible concept... In my opinion of course) and Captain Britain(a character I never warmed to), and things are looking down for the future here. So there's my thoughts on the story. As for the art, I'm not sure how I felt about it. On one hand, everybody's ears were huge for some reason... On the other hand, some of the facial expressions were absolutely spot on(especially the look Beast shoots Wolvie upon meeting Genesis), so the art, much like the story was a mixed bag. The bottom line here is that for the first time since... well, since this series began, I'm not looking forward to the future... 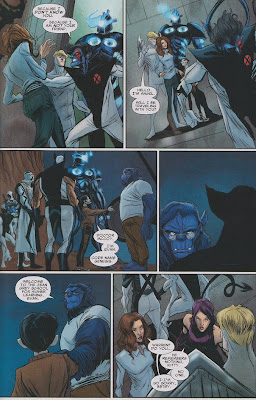