Man, I have fallen into a real comic book funk. The past 3 new comic books I've read haven't managed to score better than a 6 1/2, which means I've been reading a lot of mediocre to bad stuff. Let's hope that trend changes here with the penultimate issue(I think...) of Iron Man 2.0.

Summary: So Palmer Addley has sent his explosive suicide bombers all over the world. The Addley bombers wind up exploding from the inside, which showers nearby people with Addley DNA, turning them into little more than rabid animals. War Machine quickly realizes his brute strength could do very little to a bunch of normal people who were trying to kill each other, and has to resort to repeatedly hitting the Addley victims with knockout gas. Luckily, Iron Man(and an assistant) manage to rig up an antidote to the Addley toxin, and Storm uses her weather abilities to make the antidote rain down from the heavens, curing everybody... Or so we think... It turns out the Addley toxin is able to mutate and eventually overcomes the antidote, driving anybody who came in contact with the Addley toxin crazy again. And wouldn't you know, Iron Man had his face shield up since he thought the Addley toxin had been defeated, which causes him to catch the Addley bug. This issue concludes with Iron Man attacking War Machine high above New York.

Thoughts: And the lackluster comic streak reaches 4! This issue was WAY rushed. In one issue we get to see the full effect of the Addley toxin, get an antidote, disperse the antidote, and find out the antidote is only temporary, all in a few pages. I get that this series is headed rapidly for cancellation, but damn was there too much packed in here! And the worst thing is that the next issue will probably be even worse! Next issue we get War Machine vs Iron Man, plus we have to wrap up the Palmer Addley story so we can put this series to sleep... It's too bad really, because I had been enjoying the slow build we've been getting in this series, and all of this rushing is really hurting what had been an enjoyable, long storyline. Oh well... 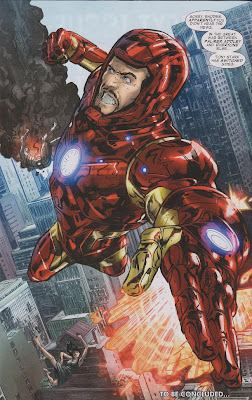