Last review of the week goes to Suicide Squad #4. It's not that I haven't enjoyed this series, it's been okay, I'm just not overwhelmingly interested in reading about anybody in this one. Unless I'm totally blown away here, this will probably be the last issue of this series I pick up.

What Happened: The Squad infiltrate a Basilisk base in order to capture a doctor working for the Basilisk organization(makes sense, right?). Capt. Boomerang pretty much messes the entire mission up from the start(and yells “oi!” WAY too much...), but Deadshot and company manage to capture the doctor, but end up running into a mess of Basilisk goons and their squad leader, Grey Lora. Deadshot hands Boomerang over to Grey Lora since Boomerang had killed a friend of Grey Lora's, so Lora allows the Squad leave to leave with the doctor unmolested. Upon arriving back at Belle Reve, a doctor stupidly disarms Harley Quinn's nanite bombs before she was safely back in her cell. Amanda Waller angrily quarantines the other Squad members and has her men take Harley(who was strangely quiet after learning of Joker's “death”) inside. A few minutes later, Waller tells the Squad to get into the prison to quell a riot that was almost definitely started by Harley to cover her escape.

The Good: Captain Boomerang getting the shaft here was great. This comic moved along at a very brisk pace and was extremely easy to understand. The Squad members NOT named Boomerang continue to make a relatively good showing for themselves. The cliffhanger was good.

The Bad: The Basilisk was about the most blatant rip off of Hydra that I've even seen! Why not just use Kobra, which is a slightly less obvious rip-off of Hydra? “Hail Basilik!”? Really? It looks as if Harley Quinn will be leaving the series to head to Gotham, which would be a great shame, since she's developed into something other than Joker's perpetual underling here.

The Verdict: I enjoyed this comic book... However, I'm not sure if I enjoyed it enough to keep picking it up... I'm seriously on the fence with this series, and will take a good two weeks to seriously debate whether or not to continue following it. But this issue went a long way in making me want to stick with this series. 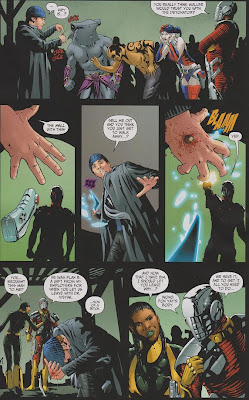