Fear Itself: The Fearless #5

Last review of the night is the continuation of the Fear Itself story... The more I think about this mini-series, I can't help but wonder, what exactly is the endgame here? Does Sin get her powers back? And if she does, then what? She'd be too powerful to be in Captain America's rogue's gallery, meaning I guess she'd end up facing the Avengers? I'm just not quite sure where this is all going... Eh, maybe we'll find out some more in this issue.

What Happened: The Thing reveals to Valkyrie that he allowed her to bypass the Baxter Building's defenses because he WANTED her to take the hammer he wielded during Fear Itself away, since he didn't want to fall under it's sway again. Valeria wanders over and helps the two free the hammer from the vault Mr. Fantastic locked it in(because god knows you CAN'T have a comic book featuring a member of the FF without Valeria showing up...), at which time Valkyrie leaves with said hammer. Meanwhile, Crossbones and some of the DOA attack the Vault to get the hammer that was being held there. Instead of securing it inside, Luke Cage makes the idiotic decision to bring the hammer into the battle, allowing Crossbones to knock Luke down with some magic before making good his escape with the hammer. This issue ends with Sin revealing that she intended to power one of the Red Skull's old Sleeper robots with the hammers... Really?!

The Good: I liked that we didn't get the obligatory Thing/Valkyrie fight in this one... Thing simply wanting her to take the hammer away made sense considering all of the terrible things it made him do... Although it does make Mr. Fantastic look like quite the ass for keeping something that was obviously disturbing Ben at the Baxter Building... As usual, the art was good.

The Bad: Sadly, most of the rest of this comic... The flashback in the beginning wasn't worth mentioning(which is why I didn't mention it!). The battle between the Thunderbolts and the Raft's staff and Crossbones and company was just plain bizarre... Why in the world would Luke Cage bring the hammer right TO Crossbones?! That was just horrible strategy! I hope I misunderstood the ending of this one(which is possible), because if the endgame here is for Sin to power up a giant robot with the hammers, that's just about the worst end to this mini that I could think of...

The Verdict: I can't say I liked this one much at all... The issues prior to this one were actually pretty good, but this particular issue just didn't do it for me. Between the stupid battle strategies, Valeria popping up to save the day(as usual...), and Sin powering up a giant robot, this one failed for me... Hopefully next issue we get back on track again. 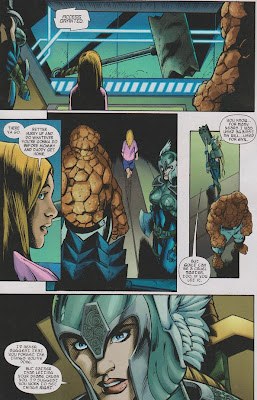