Final review of the night will be the latest issue of the Captain America and Bucky series. Now that both Cap AND Bucky have their own ongoing series's, I'm somewhat intrigued to see just what this series will be giving us...

What Happened: The second Bucky(a guy named Fred Davis... As for why he was the second Bucky, after the first Cap and Bucky “died” President Truman decided to replace the duo with two other heroes, since he didn't want the country demoralized by the loss of the original Cap and Bucky), now an elderly man, is giving a speech about the 70th anniversary of the Pearl Harbor attack when he is attacked by an android. Luckily, Captain America is there to save the day and destroy the robot before it could kill Fred. Later on, Cap and Fred talk, and Fred reveals that the android was very similar to the one that murdered the second Captain America(William Naslund), which itself was led by ANOTHER android named Adam II. Adam II had been thought destroyed, but now Cap isn't so sure. While the two men are talking, they are met by William Naslund III(?!), who reveals that he was indeed the secret grandson of the second Cap. Naslund is an expert in robotics from the Pentagon and offers his assistance with the case. Cap agrees and contacts the original Human Torch, since Adam II was created by the same man who created the Torch. With that, Cap, Naslund and the Torch leave, while Fred has a sneaking suspicion that something was fishy. This issue ends with a Bucky android exiting it's stasis tube.

The Good: I've always been a sucker for the history of Captain America(from Steve Rogers right on down to Bucky Barnes), so I enjoyed this look back at the second Cap and Bucky. The story was okay, even if it's a tad bit predictable(or so I think...). Everything from the story to the art to the dialogue was solid.

The Bad: It seems pretty likely that this William Naslund is either evil (and/)or an android... I mean him showing up like that was just a bit too convenient. The cliffhanger wasn't exactly the best I've ever seen... I mean an android version of Bucky comes out of a stasis chamber... And? While everything was solid, nothing was spectacular.

The Verdict: Eh, this was one of those perfectly acceptable comic books I yammer on about from time to time. I mean there was nothing wrong with it, but it also didn't get me excited for the next issue. It was okay, plain and simple. 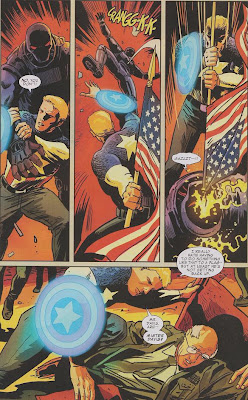