Um, I don't really have anything to say to introduce this issue... Excelsior!

What Happened: Dr. Octopus gets put in his new armored shell since his body had finally given out. With that taken care of he decides to attack MODOK's(!) Intelligencia. It appears the Intelligencia have created a weapon that could transport anything on Earth into Earth's orbit with a mere touch of a button. Octopus and his Sinister Six attack MODOK's base, and after a bit of a battle(including a battle of wits between MODOK and Octopus), Octopus and his forces win when he blasts all of MODOK's goons into space with the Intelligencia's own weapon. With that, Octopus makes MODOK call him the superior intellect, before Octopus and his Six destroy MODOK's base and weapon, since Octopus couldn't allow the Intelligencia to conquer the world in 2011 when Octopus had plans to conquer it in 2012!

The Good: I've always been a sucker for super-villain battles. They're always so much more fun(and rarer) than your basic hero vs villain or even hero vs hero fights. This issue went a long way in showing the Sinister Six as a major force to be reckoned with. MODOK showed up here!

The Bad: Yeah, sorry, but Spider-Man comic or no, there's NO way Octopus and his Six should have been able to defeat the Intelligencia. Nor should Octopus have been able to outwit MODOK. Octopus has always been smart, but he's not in that upper echelon of evil geniuses. A Spidey comic with NO Spidey?! Blasphemy!!

The Verdict: This comic was okay. I mean I liked the premise and all, but didn't enjoy the way it ended. For me, the wrong team won, and that can go a long way in souring the way you feel about a comic. A fan of Octopus and the Six would have enjoyed this comic because they won, but the Six utterly humbling the Intelligencia? I just don't think so... 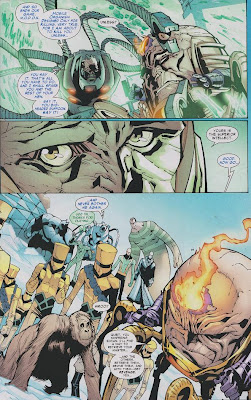