Review: In the first issue we meet up with Jimmy Hudson, the son of Wolverine. Issue number two we learned that Jean Grey had gone into hiding and was calling herself Karen Grant. That issue ended with Jimmy finding Jean/Karen. In this issue we meet a police family. You have the older brother, Joe Morgan, who followed in his deceased police officer father's footsteps, his(very)pregnant wife, and his high school drop-out brother, Derek. While working his beat one night, Joe and his partner are called to a mugging in process, but discover only a frightened woman, who was telling the officers that her attacker was swooped away into the sky. Joe's partner decides to head to a rooftop to investigate, and when she arrives, she discovers a winged mutant holding the mugger over the ledge of the building demanding money from the criminal. The mugger complies and hands over his wallet, and the officer warns the mutant to freeze at gunpoint. The mutant manages to knock out the officer with a quick flick of his wings and after tying up the criminal he flies off. Joe and a few other officers discover his partner, bruised but otherwise unharmed, and she tells them that she was attacked by the creature the people in the neighborhood had been calling The Guardian. Eventually Joe returns to his small apartment and tells his wife about his day, while at the same time Guardian sneaks into a back window of the apartment, draws in his wings with a scream and collapses onto the floor... That's right, Guardian is Derek Morgan. Joe goes to check on his brother, who explains that he must have fallen out of his bed, before handing Joe the money he took off the mugger earlier on as rent. Some time passes, and the police decide that since this Guardian is a mutant he needs to be taken down hard. As such, the police take to the rooftops of the neighborhood and wait to find Guardian. Derek swoops down and grabs his brother, who was waiting on one of the rooftops with his fellow officers, and tells Joe that he was Guardian. Joe, being a law abiding citizen first and a brother second, pulls his gun and orders his brother to land with him and tells him to turn himself over to the proper authorities. Derek refuses, and after a tense standoff(in the air)Joe shoots his brother and the two go tumbling to the ground, hitting the water below. The police fish Joe out of the water, while Jimmy(who arrived on the scene with Jean a bit earlier)swims over to Derek and pulls him out of the water. Later on, Derek awakens in the sewers where Jean had patched up his shoulder. Jimmy and Jean explain that they were mutants and that they were hoping he'd join up with them. Derek is hesitant, since he still wants to try to talk to his brother, and Jean tells him that after a quick scan of his brother's mind, there's no way Joe would accept Derek and would undoubtedly turn him over to SHIELD. Jean offers to plant some memories in Joe's head which would cause him to forget that Derek was Guardian, and make him believe that Derek had moved to Cincinnati to take a construction job. After some thought, Derek okay's the idea, and the three mutants decide to head to their next target... Disneyland!(cue ominous music!)

What I Thought: You know, this comic is probably my biggest guilty pleasure. I had given the Ultimate Universe up for dead after the horribly disgusting Ultimatum storyline, but low and behold, this series continues to be VERY strong. Say what you will about Jeph, but his characterizations for the three characters we've met these past three issues have been spot on. The first issue made me into a fan of Jimmy, while issue #2 made me care about Jean. This issue did a fantastic job of pulling me into Derek's story, as well as his brother, who narrated this issue. Great dialogue, wonderful art, a story that is slowly developing into something interesting, I can't WAIT until August for issue #4! 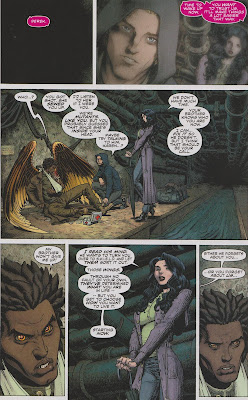