Review: This issue gets started with Zatanna rushing backstage to get ready for her show, but instead finding creepy effigies of her crew trying to kill her. After defeating the effigies, she forces one to tell her who sent them(Brother Night)and where he was(Mt. Diablo). With that, Zatanna begins to head for Diablo. Upon arriving she finds her crew members tied up, while Brother Night and his goons wait for her. Zatanna makes very quick work of Night's goons, and buries Night under some rocks. With a temporary reprieve, Zatanna frees her crew and sends them back to the auditorium. By this point Night has freed himself, and he calls forth the spirit of Zatanna's father, the Great Zatara. After gloating about how Zatara was his slave, Night tells Zatara to kill his daughter, which the spirit tries to do. Zatanna shields herself from her spirit father's attack and pulls the nightmare demon she had defeated last issue out of her hat and tells it to enter the dreams of the spirit of her father and awaken him from Night's spell. Night tries to stop the nightmare demon, but it is too powerful for him, and the demon enters the mind of Zatara and breaks Night's hold over him. After a quick and happy reunion, Zatara explains that his spirit must move on, and he leaves a VERY angry Zatanna behind. Zatanna releases the nightmare demon and tells it to go away as thanks for assisting her, before turning her full attention to Night, who was looking to slip away. Zatanna defeats and binds Night before entering his mind and forcing him to renounce his dark powers, freeing the thirteen souls he had stolen to gain his evil powers. Now powerless and defeated, Zatanna turns Night over to the police, knowing that whatever punishment Night faces on the mortal coil would pale in comparison to the hell he'd be facing when he died, since he failed his dark masters. And on that pleasant note, this comic comes to an end.

What I Thought: Hey, I've been pretty lucky with the comics I've been reading lately! This was yet another good one! The story here was completely satisfying, with Zatanna freeing her father and defeating Night, although I do have one slight complaint... This storyline seemed like it ended WAY too soon! I was hoping for maybe three more issues of Zatanna versus Brother Night, but wham, just like that, Night is defeated, Zatanna's father is saved and this storyline is over... But that's a very minor little quibble. Everything else here was great, and I only have good things to say about this series. 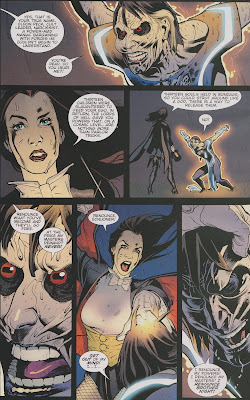