Review: This issue gets underway with Penguin, delusional from blood-loss, fantasizing about getting some of Huntress, Black Canary and Lady Blackhawk in a particularly revolting scene. While Penguin is making out with nothing, Oracle alerts BC that Savant and Creote had been killed by the mystery attacker tormenting BC and the Birds. From there, the crooked Gotham City police break into Penguin's club where the Birds were hiding and try to kill them. Oracle tries to coordinate the escape effort, but all of the computer systems in the Batcave shut down much to Oracle's shock. While Oracle becomes frustrated by her inability to help her friends, she realizes that somebody else is in the Cave, and turns around to find Savant and Creote?! The Birds continue to battle through the crooked cops, and Hawk gets seriously injured by a poisoned knife throw by White Canary. Meanwhile, Savant and Creote kidnap Oracle from the Cave, while Babs thinks about how miserably she failed in the rehabilitation of Savant and Creote. BC realizes that the only way to end this is to face White Canary in one final showdown, possibly to the death. After saying her good-byes, the rest of the Birds carry Penguin and Hawk to safety and BC sneaks up to a nearby rooftop where White Canary was overlooking the action. BC decides to banter a bit with White Canary to see if she can discover her identity, and realizes that White Canary seems to hate BC's family, leading her to believe that WC couldn't be Lady Shiva or Cassandra Cain. The two women then fight, and BC realizes who White Canary must be since the whole situation seemed so personal to WC. BC threatens to hurt or cripple WC in order to make sure her friends would be safe from WC. This issue ends with WC telling BC that she needed money for her “operation”, and that everybody seemed to forget what a monster “he” could be, with the final scene in this issue being the Birds carrying a smiling Penguin to safety.

What I Thought: Hmm... So conventional wisdom says that White Canary is Black Canary's adopted daughter Sin, and that she has been in cahoots with Penguin the entire time. At least that's what makes the most sense right now. Could White Canary be somebody else? Well I guess Cheshire would make sense, but I don't think she's a good enough fighter. As for the mastermind, all signs now point to Penguin. Why would Penguin do these things? I'd guess to get as much information out of the now captive Oracle as he can about the super-human community. Oh, with all of the talk about this storyline, I forgot to mention, this comic was great! I really enjoyed it, and I CAN'T wait to find out how it ends next issue. 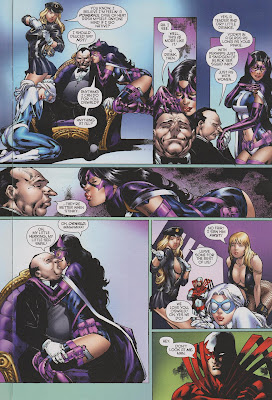