Review: This series begins with a vampire strolling to a busy outdoor cafe in San Francisco and exploding in a mass of blood, saturating Jubilee, as well as several other civilians. Pixie, who was lunching with Jubilee, takes Jubilee back to the X-Men's headquarters and the doctors look her over. After some investigating, the X-Men realize that it was a vampire who exploded, and that somehow the vampire's blood had infected Jubilee with vampirism. Wolverine, Pixie and Archangel decide to see if they can find any more vampires, and they come across an abandoned vampire lair, full of dead bodies that had been drained of their blood. Now positive that vampires were involved, Wolvie reports back to Cyclops that Dracula was indeed in town, however, unbeknownst to Wolvie, it's not Dracula who was leading the army of vampires, but his evil son. This issue concludes with Cyclops ordering Wolvie to bring in his team so they could hold a war council to decide what should be done about the vampire problem.

What I Thought: Meh. This comic was okay, and probably better then all of the other X-books on the market today combined(except for the usually great X-Factor), but it was mainly a set-up story, and it featured all of the characters that have made me despise the X-Men so much as of late(Cyclops and to a lesser extent, Wolverine). I was hoping this title would give us a new X-team without Cyclops and Wolvie, but alas, that doesn't seem to be in the cards. Oh well... Hopefully next issue will feature less Cyclops and more vampires. 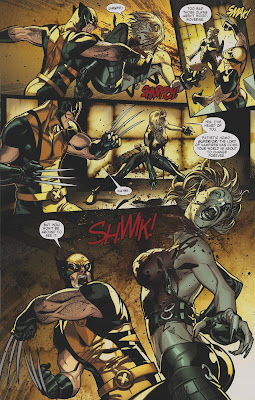