Review: This issue is basically a knockdown, drag-out brawl between Lobo(the baddest man in ALL of the universe)and Hal Jordan, Carol Ferris, Sinestro and Atrocitus in the streets of New York. It seems that Lobo has decided to collect on a bounty that was on Atrocitus's head, and Hal, Sinestro and Carol are tasked with assisting the leader of the Red Lanterns at the behest of the White Power Battery. Long story short, after much destruction, Hal chases Lobo off, since the bounty wasn't worth the trouble it was giving Lobo to collect it. At least that what Hal and company believe... Later on we find out that Atrocitus hired Lobo to attack him in order to gain the trust and assistance of Hal and company. Lobo's payment for the staged fight? A Red Lantern ring! There was also a back-up story about Dex-Starr, the feline member of the Red Lantern corps, but it was so pathetic that I'm just going to pretend that it never happened...

What I Thought: For what it was, this was a great comic. It was pretty much Lobo running roughshod over everybody in his path. The artwork was fantastic, and the story was minimal, which was perfectly fine by me. I was almost furious about the way the battle ended, with Lobo turning tail and running from Hal, but since that was explained away I really don't have anything to complain about here. 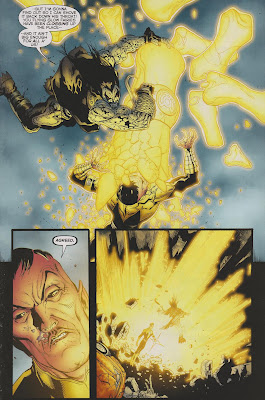