Review: This issue kicks off with Lex Luthor dangling from a building while a bunch of kidnappers watch him. Lex seems perfectly fine with his predicament, stating that if the kidnappers wanted him dead they'd have killed him already. Since he felt he was in no trouble, Lex decides to have a flashback... Yeah, I guess that's what I'd do if I was hanging upside down over the edge of a skyscraper... We discover that Lex has become obsessed with acquiring a Black Lantern ring, and as such has put nearly all of his resources into that endeavor. Besides that, Lex has managed to create a robot version of Lois Lane from Kryptonian technology and his own vast intelligence. Lex pretty much does mean spirited things to people, such as firing one of his workers for telling him something couldn't be done, and then has the man executed after he had the audacity to strike Lex. Besides that, Lex basically acts like a jerk. After finishing up his flashback, Lex heads back to the present where he discovers that Mr. Mind was the one behind his abduction.

What I Thought: Meh. I was expecting SO much more from this comic! I mean come on, it stars Lex freaking Luthor, probably one of the most complete villains in all of comics! How can't that be a lay-up? This comic just never really jelled for me though. Maybe it was the overly long flashback, or maybe it was the weak reveal at the end(Mr. Mind? Really!?!), but I just never got into this comic like I thought I would... Oh well, hopefully next month will be more cohesive. 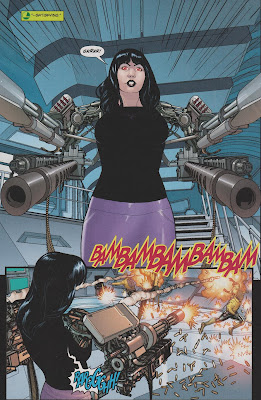