Review: Well, first off, let me say that although this is an “Iron Man” annual, Tony Stark doesn't appear anywhere at all. Nope, this comic was all about Tony's long time enemy, the Mandarin. We begin with the Mandarin kidnapping the best Asian director he could find(as well as the director's wife). Mandarin explains that he wants the director to do a movie about his life, and that if the director says no, then Mandarin would kill not just him, but his wife as well. With little choice, the director agrees to Mandarin's bizarre request, and the Mandarin begins to tell the director his life story. According to the Mandarin, he was born to a British noble woman and a well-to-do Chinese man who was a direct decedent of Genghis Khan. Mandarin explains that his parents died in a car crash, and then talks about how he was a hero of the Chinese Communist Revolution, and a staunch ally of Mao Zedong. He recounts how he received his power rings, from a dying alien(ala Hal Jordan/Abin Sur), and how he was given Mandarin City from an appreciative Chairman Mao. After listening to Mandarin's stories, the director begins to smell a rat, and after doing some research from the Mandarin's own archives, he learns that Mandarin's mother was a British prostitute who was addicted to opium, and that his father was some unnamed john. His mother died of an opium overdose, and Mandarin wound up killing his mother's pimp before escaping the opium den. He was never close with Mao, as a matter of fact, during the early years of the Revolution, Mandarin hid out in the mountains like a coward. And instead of being given his power rings from a dying alien, Mandarin killed the alien in cold blood and stole the rings. After learning this, the director began to wonder which version of the Mandarin's life he should tell, the propaganda version, or the real one. After learning that Mandarin was abusing his wife mentally and physically, the director decides to secretly begin filming the real life of the Mandarin behind his back, while simultaneously filming the Mandarin's version whenever the Mandarin was around. As the filming progressed, Mandarin began to want more and more outrageous things added into his film, including the death of Iron Man at the end of the movie, even though that's obviously false. Finally the director has enough of Mandarin's insanity and begins to put the film together while plotting with a few other production people Mandarin had kidnapped for the movie. The night of the movie premiere, the director manages to sneak away from Mandarin's sight, and finds his wife, who is a shell of her former self. The director sneaks away with his wife, while Mandarin watches furiously as the true story of his life is shown to the theater, not his sterilized version. Mandarin destroys the movie theater and kills everybody in it, while the director's wife stabs him in the neck, killing him, before returning to the Mandarin's side. This issue ends with the Mandarin bemoaning the death of the director, since he really did respect his work, all while the director's brainwashed wife served him.

What I Thought: I wasn't really sure what to expect from a comic that spotlighted the Mandarin... I mean power-wise, he's always been one of Marvel's big villains, but he's never really gotten the respect the Dr. Doom's, Magneto's or Loki's have received. It was nice to finally get some real insight into the mind of Iron Man's greatest foe. There were some great moments here, such as when Mandarin was having the script re-written(for like the hundredth time)during his climatic battle with Iron Man. After looking at the Iron Man armor his production crew made for him, Mandarin says that it was good, and that it looked most monstrous. He then went on to tell the staff to give it glowing eyes, and huge, pointed teeth! Besides that, he also wanted Iron Man to attack old women and small children in Mandarin City, and to beg for his life through tears, offering Mandarin money, women and children for his life. All in all, this annual did a good job of really hammering home just how much Mandarin hates Tony Stark, and that even when he isn't actively pestering Stark, the Mandarin is ALWAYS obsessing over Iron Man. 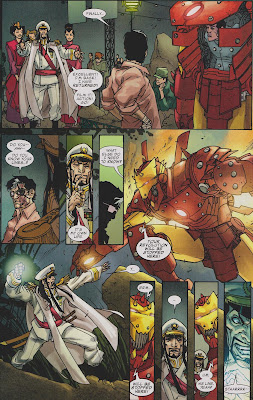 The Mandarin made for some surprisingly funny moments here. Who'd have thunk it!
Posted by x-man75 at 12:13 AM