Review: This issue begins with an old-school mobster getting let out of prison and swearing that he'd kill Bruce Wayne. Meanwhile, the man who was pretending to be Bruce Wayne, Hush, continued to dream about killing all of the various super-heroes who were babysitting him. We also get a rather strange story from the past about Hush's mother, as well as Bruce Wayne's parents, Martha and Thomas Wayne, before they were married. The moral of the story seemed to be that Thomas was a raging drunk or something... Strange. Anyway, this story suddenly ends with Hush deciding he wanted to use his pull as Bruce Wayne to free Jane Doe from Arkham Asylum, no doubt for some nefarious reasons. There was also a second feature with Two-Face, but since I never review second features, I'm just going to skip it as usual.

What I Thought: Wow, there really wasn't much to this story... It was only like half the comic, and half of that was all about some weird flashback... As for Jane Doe, all I can think is that she'll be let out either to imitate Thomas Wayne(which I wish was the case, but I doubt it since Grant Morrison is currently doing the whole “evil Thomas Wayne” story), or more likely, imitate Bruce/Hush, which would free Hush up to run wild again. If this story was a bit longer I'd give it a higher score, but as it is I'll give it a... 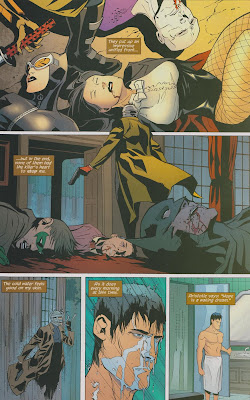