Review: This issue begins predictable with the Avengers being attacked by the alternate version of Apocalypse and his Four Horsemen. After a few pages of pitched battle, Iron Man figures out that Apocalypse was as confused by his sudden appearance at Avengers Tower as the Avengers were, but Apocalypse, being ultra arrogant, refuses to assist Stark in figuring out how/why he had appeared there. While arguing with Stark, Apocalypse and his Horsemen begin to vanish, and seem angered that they are being shunted through the timestream again. With Apocalypse and company gone, Stark reveals that he was able to scan Apocalypse and picked up several locations throughout time where Apocalypse had been. Stark figures if he follows the trail back to Apocalypse's original location he'd be able to discover the point where time was fractured. Maria Hill decides to split the team into two groups, with one group traveling through time to see if they could right the damage(that group included Stark, Protector, Wolverine and Captain America), while the rest of the team had to travel around NYC dealing with whatever other chronologically displaced creatures were popping up. Stark and his team head off to create a time machine, while the other team heads to Midtown Manhattan and discover a big guy with a sword and a huge red T-Rex.

What I Thought: I've got to say, I'm STILL loving this storyline! Lots of Classic Avengers action, problems in time, Apocalypse, I mean it's like Marvel is specifically trying to cater to me! I don't have a single thing to complain about here... Even Bendis's usually painful dialogue was kept to a minimum! I can't wait for issue #4! 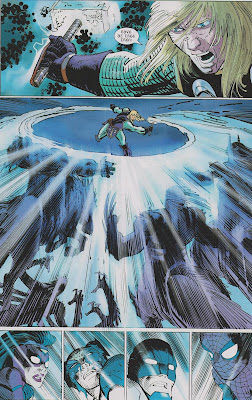 Ahhh... What says classic Avengers better then Thor pulverizing some losers?
Posted by x-man75 at 2:56 PM