Hey X-Maniacs, JT here with my final review of the week, Uncanny X-Men! We left off with The Avengers raining down on the Cyclops and his X-Men, now let's see how the new students and my favorite X-Team deal with Earth's Mightiest Heroes. 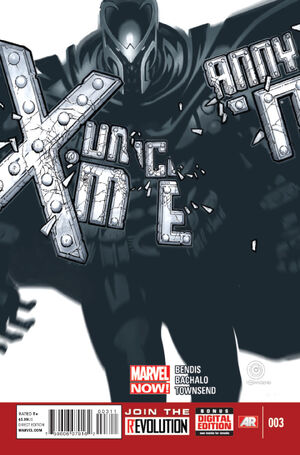 Summary: This issue starts things off with a flashback to Eva as a child, giving a report on her favorite hero, Captain America. So you can imagine her surprise when he and the Avengers rain down outside of her home as Eva, her mother and the rest of the Uncanny X-Men watch on. The Avengers tell Emma and Scott to come with them, but of course that's not happening. The two teams debate about who's to blame, with Emma saying Iron Man is the one that split the Phoenix Force and it took them, something they didn't want, then they did good with the powers like trying to end world hunger and wars, but the Avengers are quick to say that Cyclops killed Xavier and the Phoenix Five basically enslaved the Earth. Ms. Marvel recounts how the X-Men took her in and helped her when she was down on her lucky, and Cyclops asks Carol to join them, and surprisingly she doesn't say no, but she doesn't say yes either. The students stick up for the X-Men, saying how they were beiong persecuted and Scott and the team saved them, but The Avengers don't want to listen, they want Cyclops behind bars for killing Xavier. Eventually the two groups decide talking won't work, so the Avengers attack, but Eva manages to freeze them all in one of her chronal blasts. The heads back to their base and Cyclops quickly deduces that they were betrayed, which leads to Magneto saying it was him. Before Cyclops can get angry enough to attack, he gives Erik a chance to explain himself, and he reveals he's basically been a double agent, much like I would say when I was a kid playing secret agent. He says he's playing their stooge so he can keep up with what their doing, so that he and the X-Men know what to expect. Scott still doesn't seem to fully trust Erik now, and says he wishes Emma could still read minds. The issue comes to a close with Cyclops and the team realizing the Avengers were still stuck in time, so they decide to pay a visit to the Jean Grey School for Higher Learning.

Thoughts: I really enjoyed this issue. I liked the bit with Eva at the beginning, as we got a bit more development for her, plus seeing her stand across from her hero seemed like a bigger moment because of it. I also really loved the big argument between the Avengers and the X-Men, both teams made excellent points, and while I side with Scott and Emma, I couldn't help but notice how many good points Captain America, Iron Man and Hawkeye made. This is one of those comics with hardly any action but such great dialogue that I'd highly recommend it. Plus with Scott and his team going to the Jean Grey school in the next issue, only awesome things can come from this.

Magneto: You keep referring to yourself as our leader but I don't remember voting.