Hey X-Maniacs, JT here with my first review of the week. With Damian Wayne now laid to rest, let's see how Batman handles not having a Robin for the first time since the death of Jason Todd. 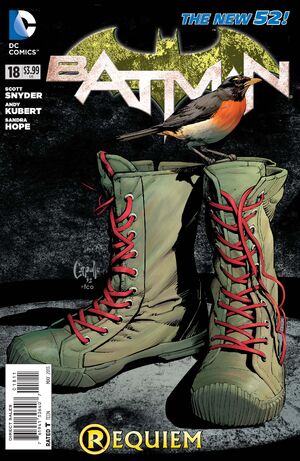 Summary: This issue gets underway with Harper Row and her brother Cullen going to see their dad in Blackgate Penitentiary. Not surprisingly, their dad is an asshole and refers to Harper's gay brother, Cullen, as his other daughter, which hurts Cullen and causes him to leave the room quickly. Harper lashes out at her dad verbally and he implies that he knows she sent her friend after him to get him locked up, but Harper doesn't know what he's talking about. From there we see Harper has been going on patrol for months, with a make-shift grappling hook going around the city and tracking Batman, as Bats has been relentless in taking down villains, so much so he's getting sloppy because he hasn't taken a break. Bats eventually bites off more than he can chew when taking on a muscle-head that does dogfights with dogs he injects with venom. The dogs attack Bats and since their bigger and stronger than most dogs, and Bats is tired, things look to end badly until Harper shows up with a device that makes a high-pitched sound that drives the dogs away, allowing Bats to knock out the meathead. Harper tries to get some praise from Bats but instead gets socked in the face. Bats tells her that this isn't a game, and people who have trained longer and harder than her have died doing what she's trying to do, and to go home. Harper stands her ground and says she isn't expecting Bats to take her in and show her the ways, she doesn't wanna know who he is because people let her down, and he's an idea, not a person as far as she's concerned. Batman doesn't want to hear it and tells her to go home, before taking off. Broken nose and all, Harper isn't giving up, so the next morning she heads to meet Bruce Wayne, and catches him since Bruce was roped into being in the office after falling asleep there on a break from being Batman. She tells Bruce she wants to get a message out for Batman because if he continues on like he is, he'll kill himself, and she figured he could help since he finances Batman. Bruce agrees to help and we later see Harper on a rooftop met by Batman, as she tells him what she did and that the message is something her mom would always tell her before she was murdered. She leaves Batman on the roof and says she hopes the message means something, and he whispers to himself that it does, as letters light up on Wayne Enterprises that says "Resolve", leaving Batman standing on the roof across from it as the issue comes to a close.

Thoughts: I've suspected Damian would die since about November or so, and I mentioned that to X and we came to the realization that if he did die, Harper would inevitably be the next Robin. Now I'm not 100% sure she'll take that mantle, she may take another name, but all in all, I was against it, because it doesn't make sense for Bruce to take in another kid, especially after losing his son. That aside, if she's going to do it anyway, he's going to take her in if only because he knows she's less likely to get hurt with his training than she is with none. But that aside, this issue, Harper won me over. I didn't care for her prior to this, but in this issue I felt like she encompassed the determination of Cassandra Cain, the brains of Babs Gordon, and the humor as well as the ability to stand up to Bruce that Stephanie had. All in all, she seems kind of like an amalgam of the three Batgirls, with a bit of a twist. So I like the character and the conversations with both Bruce and Batman were great to read, they really gave you a sense of where Bruce was mentally, hurt but not outwardly mourning, so content with punching things and fighting crime until he exhausts himself, which is classic Bruce.So all in all this issue gave me some great conversations, so great characterization for Harper Row, and Cullen Row, as well as introducing their sleazebag of a father, who will undoubtedly be back in the future.

Batman: This isn't a game, Harper, If you pursue this, you will die, do you understand ME?!