Hey guys and gals, today's a JT day, so you know what that means, an awesome review by the Superior blogger about the Superior Spider-Man. So let's get to it, because this intro is just for show! 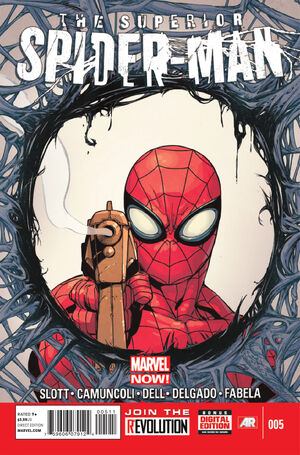 Summary: This issue starts things off with the C.E.O. of Phizzy Cola, the parent company of Burger Town, dealing with all of the backlash of the murders by Massacre. Surprisingly, she's then approached by Massacre, as he'd gotten past her security by kidnapping the guard's family. He surprisingly offers his services to her, to kill a bunch of people while wearing a shirt of the competition, Mocha Cola, for a mere million dollars. That's a killer bargain! Yep...I went there. Back with the Superior Spider-Man, he's using Uatu Jackson's facial recognition software to find Massacre the next time he pops up in public. From there, Doc Parker heads off to meet the person that gave him a card for tutoring in the last issue. Turns out, she's a little person named Anna Maria, they talk as she feeds him and offers him tutoring, but he proves he's not just the pretty face Anna thought he was. They then eat desert, cause Doc's gonna probably end up dating a little person in Peter's body. After his dinner date with Anna Maria, Doc heads out as Spidey and his app goes off, showing that Massacre has been spotted in public. Spidey calls the cops and tells them where Massacre is and to keep him busy until he gets there, which Peter admits is pretty clever as he'd never thought to do that. On the way there, Doc accesses Peter's memories and remembers that Massacre likes to hold hostages in other places wired with explosives which he detonates remotely, and tracks the frequency and finds the hostages. Spidey frees the hostages and heads to stop Massacre, meanwhile Massacre is already opening fire on police officers and hostages. Spidey saves a kid that's almost shot by Massacre, thanks to Peter's urging, but is then upset he gave up his tactical advantage. Spidey gets close enough to subdue Massacre, while not even trying to save some bystanders that got shot in the process, which is seriously irking Peter. Spidey walks up to Massacre and Massacre tries to use his ace in the hole by saying he has hostages, but Spidey says he's already saved them, as Massacre pressed the detonator and nothing happens. He then picks up Massacre's gun and shoots him in the shoulder, then stomps his hand. Spider-Man asks Massacre what he should do with him, turn him in so he can break out and kill more people, or end him now...when one of the former hostages yells that Spidey should kill him. Massacre suddenly starts crying and says he's afraid, it's the first emotion he's felt in years. Peter tries to tell Doc that this means there's a chance he can be cured and that's why they don't kill, cause there's always hope. But Spider-Man says this means nothing, he's a killer and the killer will always hide inside him, so there's one solution, and Superior Spider-Man kills Massacre. The aftermath is some citizens are happy Spidey did it, as is Mayor Jameson. We also see Ms. Pullman is confronted by Spider-Man, who says he knows she paid Massacre to kill those people for publicity, and now she can tell the authorities everything or answer to him, as her apartment fills with Spider-Bots that crawl towards her. The issue ends with The Superior Spider-Man stating that it's now his job to watch over everyone and judge them all.

Thoughts: When I started this issue, I figured I wouldn't like it. Massacre killing for money seemed weird, and so did Spidey's little chat with Uatu, and I can't say I cared much about Doc's little date with Anna Maria, although I do like her character already. The thing that saved this issue for me was the really strong ending. Now, I love the Massacre character. He's got no emotions, he's ruthless, and he's kinda the James Gordon Jr. of Spider-Man, and I don't know who came first, plus I'm too lazy to look to see if Slott or Snyder did it first, but whatever. Point being, I'm a fan of the character and I'm sad to see him go. What I loved here was the symbolism, as Spidey killed a villain that murdered people, something many people wish Spidey or Batman would do, kill. It makes sense, but the symbolism is that Spidey would never kill, because he believes people can change...in doing so, he didn't kill Doctor Octopus, and that decision came back and bit him in the ass because Doc took his body and killed him. Even then, Spidey put his hope into Ock, hoping he'd do the right thing, and Doctor Octopus killed Massacre because he said that he'd still be a villain and a killer deep down, which is exactly what Otto is, even as Spider-Man. That logic, on top of Spider-Man using a gun and basically becoming big brother, is kind of reminiscent of Batman during the whole Brother Eye thing. So I'll say this, I'm excited to see what happens now, especially how people who know Spidey is Peter, like Carlie and MJ and the AVENGERS will react to him killing a man, as well as the reaction of the villains and citizens of New York.

Spider-Man: You are who you are. That killer will always be hiding inside you.