Hey crew, JT here with my second review of the week, as we continue on with the Requiem of Damian Wayne. This issue is rare because it's completely silent, there's hardly any text, save for a letter near the end. So let's see how this worked out. 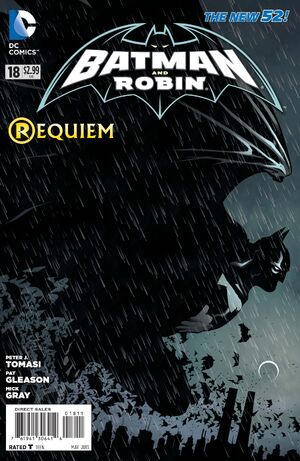 Summary: We start things out with Bruce sitting in Damian's room, looking at his notebook that's full of sketches, including a robin, Titus, Bruce, Alfred and Bruce's parents graves. Alfred is seen crying at the family painting of Bruce, Dick, Tim, Damian and Alfred from the first issue of Batman (I think it was that.) and coincidentally, Damian's picture is unfinished. Bruce walks over and closes the curtains over the painting then carries it away. From there, Bruce slides down the pole to the Batcave, suits up and goes to fight crime, the whole time seeing memories of Damian, and how happy he was to team with his father. The memories of Damian make him even more upset and he takes it out on villain after villain, leaving them all on the roof by the Bat-Signal, leaving Gordon and Bullock in awe. Bruce eventually returns home, battered and bruised and showers before heading to the lockers where they keep their gear. He mistakenly bumps Damian's locker, causing it to open and finds a note his son left him. The note says he's sorry for disobeying him and going to fight Leviathan but Bruce needs him by his side.  He also delivers an amazing line I'll post below as the line of the issue. Bruce sheds a tear as he reads Damian's letter then just snaps, he starts breaking everything and screaming before cradling Damian's costume as this issue comes to a close.

Thoughts: Amazing. Simply amazing. Tomasi scripted a hell of an issue in pure silence basically, which seems like a very hard thing to do. But he and Gleason, major props to Gleason, manage to show so much emotion through these pages. You can see the hurt on Alfred's face, the regret on Bruce, as well as not just his anger but his depression and the somber tone of the issue. You can even see the sad and bit of scared look on Titus' face while watching Bruce breakdown at the end of an issue. There's so many issues of comics that I love because of the dialogue, hell Batman #18 was one of them, but this took the opposite approach and gave me the same result, a comic I thoroughly enjoyed. This issue was perfect as far as I'm concerned.

Damian's letter: Because it will be hard for me to say these words face to face, I want you to know that Mother may have given me life, but you taught me how to live.