Hey X-Maniacs, JT here with my second review of the week, All New X-Men. This is gonna be a pretty quick review, so... lucky you guys! 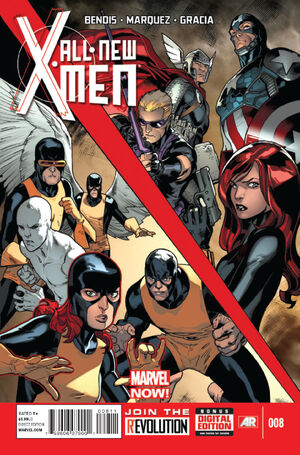 Summary: This issue gets underway with past Angel and "Chillax. Bro" Angel flying when Warren realizes something is up with his future self. Their interrupted when they see HYDRA attacking Avengers Tower and the two fly in to help, that is until the Avengers show up and take out HYDRA completely. From there, they realize that there are two Angel's and pay the X-Men a visit at the Jean Grey School for Gifted Mutants. Captain America and Beast talk and while we don't see most of the conversation, we have it acted out for us by Iceman and Kitty Pryde in a joke that goes on for way too long. Afterward, Cap basically tells Beast to keep the Original Five under reins and keep him in the loop. The issue then comes to a close with past-Angel freaking out and trying to transport himself back home because he hates being in the future, until Jean Grey calms him down with her powers then says once again that the Original Five are staying.

Thoughts: Honestly, I was a bit let down by this issue. Nothing really happened, I mean the stuff with Angel's was kinda meh because Warren still doesn't even know why his "future self" is acting so weird. The stuff with SHIELD seemed pointless and only served to bring in the Avengers for a conversation that literally could've just taken place on the telephone, especially since all we got to see was the end of it. Speaking of that, the stuff with Kitty and Bobby saying what they thought Cap and Beast were saying started funny but it went on WAY too long. Five panels of them pretending to be Cap and Beast was kind of overkill. And the end with Warren freaking out then basically being "Doctor Light'd" by Jean was...yeah, it made Jean seem kind of villainous here, especially with her pious remark saying that Hank doesn't have the right to lecture people, especially since it was the Old Hank that said it. All in all this issue seemed like a miss and a placeholder until the Mystique issue that's coming next, which was weird since she put her plan in action in the last issue. Anyway, here's hoping the next issue is better.

Jean Grey: I can read your minds. Stop worrying. I'm in total control.