Hey guys and gals, my second review of the week is All New X-Men. The last issue fell a bit flat for me so hopefully Bendis and the crew can bounce back for this one. 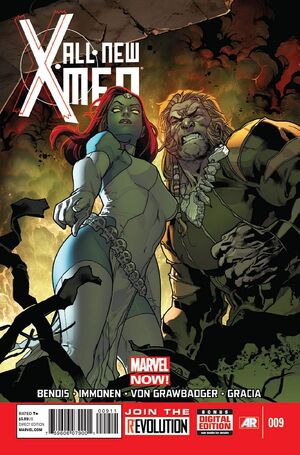 Summary: This issue gets things started with Kitty taking the O5 into Times Square for a training exercise for taking on Sentinels. The team decides to do their own thing instead of working as an actual team, which is weird considering they worked as a team in their own time period... Anyway, they fail the obvious simulation (Kitty sat there with her arms crossed the whole time, like Jason Todd in a Bat-Family book) so you could tell they were never in danger. Afterwards, Kitty tells them what they did wrong, including telling Cyclops he did a good job but his team didn't listen to his orders, even though she and Storm declared Jean the leader of the team privately, but whatever. Angel cuts this short by asking what this training has to do with anything, but Kitty says she's training them to make sure they don't die while their under her guidance. As everyone leaves, nosy ass Jean Grey (that Kitty has already scolded twice in this issue for reading her mind) asks Cyclops who Mystique is, which also makes Kitty ask where he met her. Scott tells them to get out of his head and walks off, with Kitty following after. Next we see Maria Hill bringing Sabretooth to The Raft, but of course it's actually Mystique, and Sabretooth takes out the guards as she goes to meet up with Lady Mastermind. Mystique basically says she's ready to use her powers to get rich as hell, and invites Lady Mastermind along for the ride, which she accepts, and the three make their way out of The Raft before the Avengers can arrive. From there we see Angel asking Beast about the "Mutant Genocide" he mentioned, and Beast basically tells him that hopefully, it's been avoided, as he brought them here to snap Scott out of his ways and hopefully their appearance will make him come to his senses before the Mutant Genocide is pushed to that point. Beast's words are cut short when he and the rest of the school notice that Cyclops, Magneto, Emma and Magik have arrived on the school grounds, continuing from Uncanny X-Men #2, as this issue comes to a close.

Thoughts: I love that this issue and Uncanny X-Men ended at the same spot, makes it feel like you're reading about one big world instead of a bunch of different stories. Also, that team looks SO much better in this book instead of Bacchalo's art in my opinion, although I hate that Emma and Lady Mastermind are wearing the same clothes basically, and both them and Magik feel the need to wear black costumes and show their cleavage. (Or cleavage and thighs for Emma and Magik.) Must just be some big female villain website they order their outfits from... That stuff aside, I gotta say, Iceman is REALLY rubbing be the wrong way, he's not coming off funny or likable, he just seems like an idiot. I mean, he's pretty much an adult, if not a late aged teen, and he's asking Kitty if they can go to Toys R Us?! And Jean probing everyone's mind every chance she gets is making her pretty unlikable to me, hell I can see why Scott eventually goes crazy if he has to put up with her and Kitty and everyone staring at him like he's Hitler's son at a Synagogue. An