Hey X-Maniacs, JT here with my final review of the comic week, and it's issue two of Jeff Lemire's Green Arrow run. His first issue was pretty good as he basically stripped Ollie of everything, so let's see how Ollie reacts to the news that he, just like the cast of Lost, should have never left the island. 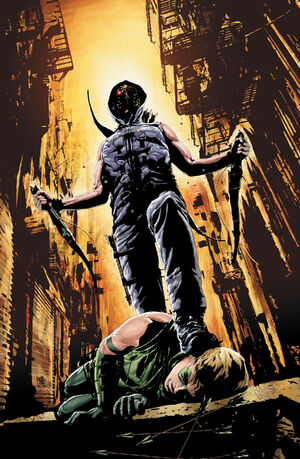 Summary: This issue starts with Ollie in the desert, about to give up and die when he thinks back to learning how to use a Bow and Arrow and he's given some words of encouragement about not quitting from his dad, so he powers on. From there we jump back about three weeks and Ollie gets a note from the mysterious Magus, telling him to check the office of Emerson. Ollie decides to check the office, but first calls Steve Trevor and asks him to hold off the Cops, FBI and the heroes from coming after him for a murder he didn't commit, as well as give him time to try to solve this mystery hat is his new life. Trevor gives him 48 hours, because apparently he's got pull like that, then Ollie heads off to get some help. Ollie goes to some guy named Henry Fyff, he'd fired before that had a ton of potential but was fired personally by Ollie for stalking Naomi at Queen Industries. He reveals to him that he's Green Arrow and needs his help, and instead of laughing at him then selling him out to TMZ in an instant, Fyfe decides to help him, because... I have no idea. Anyway, with Fyfe helping him as his tech guy and controlling the camera's in the office to give Ollie a heads-up on anyone who may be there. Meanwhile, Komodo has apparently staged the death of Ollie's friends, Jax and Naomi, and tries to get them to sell out Oliver and track his locations. Jax says no and gets an arrow to his forehead for his loyalty, and Naomi sells him out immediately, saying she'll help Komodo. We also get introduced to Komodo's daughter, who I can best explain as a tiny, version of Lady Shiva, sans fighting skills. Back with Ollie, he searches Emerson's office and finds a secret room with a bunch of weapons, as well as a pic of Ollie's dad, Emerson and Komodo together on the Island where Oliver was stranded. Magus is also there, waiting for Ollie, and tells him to go to Black Mesa, Arizona, but Ollie wants answers. Too bad for him the police show up in a chopper and try to arrest him for trespassing at a crime scene. Ollie shoots and arrow and swings from his bow down the line, when his line is broken by an arrow, causing Ollie to drop as this issue comes to a close.

Thoughts: I'm kind of conflicted on this issue. I like the mystery of Ollie's dad's past, as well as Komodo knowing him and them all being on the island together for some reason. I found it kinda surprising that Naomi was willing to sell out Ollie, I mean Jax didn't and he died instantly so I could see how she'd be afraid, but I mean, what's gonna stop him from killing you after you help him? I mean, everyone already things you're dead... So yeah, that aside, plus the absurdity that Fyfe would help his former boss who fired him after he reveals he's a vigilante, especially since he's not even helping him for money since Ollie is dirt poor and Komodo is basically buying Queen Industries in his civilian identity. Also, I hate those cliffhanger endings. Don't show me that he's about to die in the desert then flashback three weeks and tell me I should be worried about the fact he's falling. It makes no sense... I KNOW he didn't die and if he got remotely hurt badly, he wouldn't be in the desert because he'd have never left the city. That stuff aside, I am finding myself caring a bit more about Oliver than I have since they rebooted his amazing history, so I guess that's a plus.

Fyfe: What the hell are you doing here?! You didn't come to kill me too did you?!