Hey X-Maniacs, JT here with my first review of the week, Superior Spider-Man! This issue was written by my boy Christos Gage, so I'm expecting great things for this Age of Ultron related Spidey issue, so let's get to it. 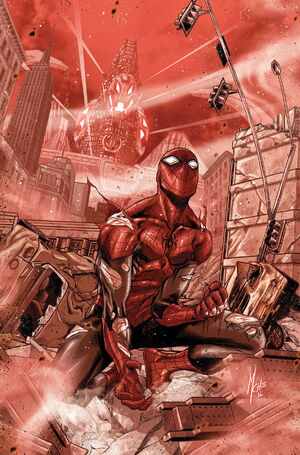 Summary: (Hey all, X here to chip in on the review!  Wherever you see red?  That's me.  Hit it, JT!)We start this issue by finding out that Doc Ock is still Peter Parker, and has just been putting on a good act(too good an act if ya ask me...), which actually works for continuity. Ock is looking at the destruction, something he'd dreamed of causing in the past, but now he's mourning Mary Jane and May, since he wasn't there to save them. He blames Peter, saying he was so tired from cleaning up his mess of a life that he slept through it when people needed him most(I loved Doc's self-righteousness here, and the way he blamed Peter). Doc's anger is put on pause, as he's approached by Tony Stark(Ock battled Tony in an issue of Iron Man during Matt Fraction's run.  It was really good!) with a Hail Mary plan to dispatch of Ultron, using a device that can move an entire area to the Negative Zone, but they need Negative Zone Tech, which is supposedly at Horizon Labs, which is where Spidey comes in, since Peter worked there(That was the LONGEST sentence in the history of humanity!  Damn, JT!!). Stark sends Ock and Quicksilver to Horizon, and Quicksilver goes to place the devices around Ultron's location. Doc Parker decides he's not going to listen to Alcohol-damaged brain of Tony Stark(HA!!), and instead heads to his lab. He then uses his Spider-Bots to take over a few Ultron Droids, giving him control of them and takes the fight to Ultron's Central Intelligence, only to discover that it isn't Ultron's main body. Having failed and now having Ultron know of his location, the Ultron droids quickly close in on Superior Spider-Man. Doc heads after the tech that Stark sent him to get but it's destroyed by a droid, the droids then blow Horizon labs to smithereens, but Doc manages to escape through the sewers. When he arrives back at the hero hideout, he tells Stark he failed, but Stark said he must not have had enough time to charge the device. Doc, clearly ashamed, says that Stark is right, although the device would have had time to charge if he'd followed Stark's original plan. Stark tells him not to beat himself up, and it probably wouldn't have worked by Doc tells him it would have worked, which is a big gesture from Doc(I guess Tony's alcohol-damaged brain worked after all!). Stark says it doesn't matter now, maybe Luke and She-Hulk will be able to come through, and joins the rest of the heroes. Doc watches on, thinking how he always treated his teammates as lackeys, beings that only made him weaker, but this is different. The issue comes to a close as the Superior Spider-Man joins with his fallen comrades, no longer just looking out for himself.

Thoughts: This issue really worked in my opinion. Christos Gage (one of my favorite writers)(Mine too!!) really understood what made Doc Parker tick here, and did a great job of showing a ton of different emotions for him in the span of this issue(That's a good point...). The funny thing is this issue probably wouldn't even have happened if Spidey wasn't Superior Spider-Man right now. The situation of Ock as Peter choosing to disobey orders from a supposed man of lesser intelligence like Tony Stark for the sake of trying his own plan, partly because he wanted to be the hero, then failing, not only himself but his fellow heroes as well, then having to live with the knowledge that Stark's plan probably would have worked and being humbled(Heh, you said "humbled"...) by that fact was great(Dude, what is up with you and the run-on sentences today?!). Every action here made sense, the way he blamed Peter for his failings, the anger at not being able to save May or Mary Jane, the quiet shame of letting down everyone when he returned to Tony, knowing he may have cost everyone a chance at beating Ultron, and realizing that Peter being an Avenger didn't make him dependent, it just strengthened a powerful individual even more(Damn, you were poetic here, JT!  Nice!).

Superior Spider-Man: I beat death... But Death, it seems... does not like being cheated.