Guardians of The Galaxy #1

Hey faithful readers, JT here with my first review for the Guardians of the Galaxy series. The issue before this was amazing, so hopefully this one keeps the momentum.

Guardians of The Galaxy #1 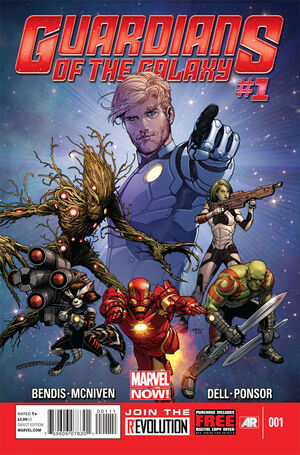 Summary: We start things off with Peter in a space bar, being approached by his father. Peter's dad tells Peter to stay away from Earth, as it's been declared off-limits from now on by the Council of Galactic Empires. Peter says that would only make the Earth a target for people who want to give a giant screw you to the council, including a guy like Thanos. Peter's dad, J'Son, tells Peter not to worry about Earth, and that he should accept his role as Starlord of Spartax instead of going around fighting crime, but the conversation is cut short by Gamora's appearance, which causes Peter to leave with her. Meanwhile, Iron Man is flying around space is soon attacked by the Badoon, so the Guardians show up to even the score. The Badoon decide to escape in a smaller ship and kamikaze their ship, taking the Guardians by surprise and taking Stark out of action completely since his suit starts malfunctioning. The Guardians save Stark and regroup on their ship, which leads to Gamora telling Peter she thinks his father set him up, knowing he'd do the opposite of what he requested. Peter asks why she thinks that, and she reveals that the Badoon are headed to Earth to attack, and she believes that if J'Son can't have Peter or Earth, he's content with sending them both to hell, as this issue comes to an end.

Thoughts: This issue was a bit slower than the last issue, which was fantastic, but this was far from a bad story. I enjoyed Tony Stark realizing he needs to take himself out of the moment and look at things on a more cosmic scale by joining the Guardians of the Galaxy. I also thought the character development of Peter's dad, from being a suave, debonair alien that landed on Earth, to the very smug, master of mind games and tyrannical ruler that we saw here. All in all, this issue wasn't as great as the last one, but it did a good job of showing the team, showing us what to expect, and giving us a look at the current relationship between Peter and his dad.

J'Son: Gamora, the most dangerous woman in the universe.
Peter: Jealous?
J'Son: Yes.