Injustice: Gods Among Us #2

Hey Todd Squad members masquerading as X-Maniacs, JT here with my first review of the week. Before I jump into that though, since this is the only DC book I review this week, I just wanted to say this about the Batman Inc. 8 thing that's sweeping the internet. If you haven't read it, skip down to the review because I'm going to spoil the HELL out of it! Alright... gone yet? Okay cool, so, Damian's dead or whatever, and this is something I couldn't wait for, that is before he started getting likable thanks to Bryan Q. Miller's Batgirl run and Tomasi's Batman and Robin and grew on me. So I'll say this... Bruce... three out of five of your Robin's have died. You are a horrible guardian. You should probably just stop taking in Robin's.... Jason, Stephanie, Damian, each time you didn't get there in time... so... work with adults now... okay? Also, he'll be back... his mom put Jason in a Lazarus pit and she didn't even KNOW him... Now we return back to are regularly scheduled programming.

Injustice: Gods Among Us #2 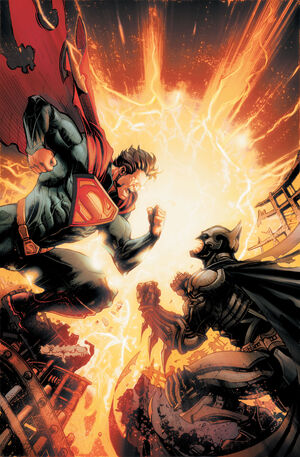 (Edit: This is a pretty big review, so I spaced it in three parts for you guys... I'm nice like that.)

Summary: In the last issue of Injustice, Superman had just killed Lois, their unborn child, and the City of Metropolis, all thanks to The Joker's insidious ways. We start off with Bats asking Joker why he did it this to Superman, and Joker gives a line of the issue worthy answer, two pages into the issue. Wonder Woman goes to talk to Superman and he asks her to watch over Lois and makes a beeline for The Joker, as he's been taken to Gotham by Batman. Green Lantern tries to stop him but he bursts through his bubble, and then uses his super speed to take Hal's ring, causing him to drop from the sky. Superman catches Hal and places him on the ground, then takes his communicator and destroys it so he can't warn Batman. Superman heads to the Gotham Police Station where Bats is interrogating Joker, and Joker says he basically did this to corrupt Superman, but Batman says Superman is the best of them and nothing could corrupt him. He's soon proven wrong as Superman breaks through the wall and sticks his hand THROUGH the Joker, as Joker's torso engulfs his elbow, leaving Batman shocked.

Next, we see Harley Quinn in a cop car, as she breaks free after killing the two officers transporting her to Arkham Asylum. Turns out she heard over the police radio that Joker was dead and just snapped. Harley stops at one of Joker's safehouses and changes out of her prison gear to her Harley clothes and is confronted by Green Arrow, but Harley surprisingly gets the drop on him. As she's about to smash Ollie's head in with a mallet, it squeaks because she made a mistake and grabbed a toy mallet. She pulls out a real gun and Ollie jams the barrel with an arrow, which makes Harley giddy like a child and she asks him to do it again. Oh Harley, you lovable fool. Ollie obliges and does it again, this time with a net arrow, and constrains Harley. Harley asks if he's taking her to Superman, and he says no, he won't stand by while a superhuman squashes her like a bug, but he's also trying to stop a friend from making a big mistake. Ollie gives her a arrow with knock-out gas to...knock her out, as Harley proclaims he sucks and passes out. She wakes up in Green Arrow's underground lead-lined Arrow Cave, and makes fun of how stupid that name is. She asks why he doesn't call it something that makes sense, like The Quiver, to which Green Arrow says that actually is better. HA! As Ollie's leaving, Harley describes her love for The Joker, and it sounds a lot like the women that have loved Ollie, because they forgive him, then he does something terrible, and they forgive him again. Before Ollie leaves, Harley asks him to give her a maniacal laugh to cheer her up, but she says no, so she puts on a fake mustache which causes Ollie to laugh. (It makes more sense if you read the comic, I promise.)

From there, we see Superman in the Fortress of Solitude, still covered in The Joker's blood and with a bit of a beard, so it's been a few days, as he hears a bunch of news reports but focuses on one about a War in Bialya. Superman proclaims "No more." and flies to Bialya, saving a small boy and then apologizing for not being there sooner. He then flies to Bialya's Capital building, grabs their president and flies him down to the war-torn area of the people he's supposed to protect. Suerman then strips him of his shirt and tells him he's no longer in charge. Wonder Woman arrives and tells Superman that he's being filmed, and he says he has something to say, but she tells him she will call a press conference at the United Nations, and she should wash the blood and shrapnel off of himself and shave, and then he'll say what she's been waiting for him to say since they first met. At the Press Conference, Superman says he's sorry, and he failed them. He reveals himself as Clark Kent and he says for too long he's reported on crimes and reacted to them. He says he will not allow monsters to roam free and hurt people, and he's calling an immediate world-wide ceasefire. He doesn't care if you're a Terrorist, King or President, you don't have the right to take innocent lives, and that everyone will stop all hostilities immediately, or he will. The issue ends as we see Superman say "It's over."

Thoughts: Goddamn this comic was amazing. I don't know where you've been hiding, Tom Taylor, but I will gladly read any comic you write. First things first, the first act or whatever you wanna call it was amazing, seeing how easily Superman was able to stop Hal from slowing him down, hearing Joker's reasoning for messing with Superman, and the debate Joker and Bats had about whether Superman could be tainted, then seeing Superman just impale The Joker with so much rage in his eyes, I loved it. I also really enjoyed seeing Harley snap, as well as seeing what may be a new crush in the form of Green Arrow. That was an odd duo to see together but it worked, the goofy humor, the way Harley was written here was fantastic, and Ollie realizing that in a weird way he's no better than The Joker when it comes to women was interesting and it kinda fit for Ollie, since he's a known womanizer. Lastly, seeing Superman finally do something myself and X have been lobbying for every since the amazing Superman/Batman "Super/Bat" arc from issues 53 to 56, Superman has finally decided to stop world-wide crime, which is something Batman did when he got Superman's powers. It makes sense now, as with no Lois, no job, no friends really outside of the Caped Community, that he'd do this. I was already really excited for the Injustice game but this series is doing an amazing job of making me even more excited for it. So if you couldn't tell, I loved pretty much everything about this issue. Now that said, we know Joker is in the game. My thoughts are either somehow he didn't die...which would be shocking, or he's in the game's story mode for flashback purposes only or stuff that happened before Clark kills him, but I guess we'll see.

Batman: This has always been about us. Why did you do this to him?
Joker: Every time you and I play, I lose. I was getting a bit bored of always losing. I thought I'd try this on easy mode for a bit. And it was easy.