What's up everyone? JT here with my last review of the comic week, and it's the second issue of Uncanny X-Men. In the last issue, we saw that Magneto is the traitor of the team, giving information  to SHIELD's Maria Hill, now let's check in the the rest of the Uncanny X-Men. 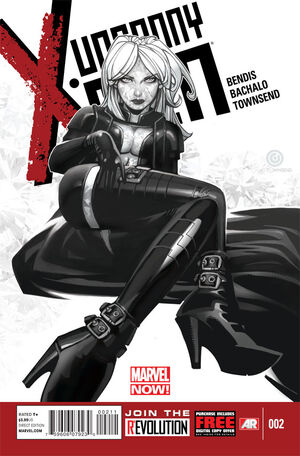 Summary: This issue starts with Emma Frost explaining, in great detail how upset she is that she can no longer read minds thanks to the Phoenix Force, as well betraying Scott, the man that loves her. Scott interrupts Emma and asks her to join him in welcoming the New Mutants, but it turns out she was projecting her thoughts by mistake, on and off, and he heard some of them, which only makes her more angry since she can't even control who hears her thoughts and when. The two then discuss whether of not they hate each other, which they don't, but they can't get back together. Scott asks Emma to stay because she's an amazing teacher and the new mutants need her, and she agrees to stay to help them. Their interrupted by Magik, as she says everyone is ready, then asks if Scott and Emma are back together. They say no and Illyana says "Thank the Dark Lords." and she leaves, as Emma proclaims that she scares the hell out of her. Scott and Emma then head inside and start what's basically a mutant Orientation and give the kids the info on Sentinel's and whatnot. They then ask Fabio to show them his power manifestation, and suddenly gold orbs start popping up all over the place. One of the students ask where they are, and Magneto tells them it's the new Charles Xavier School for Mutants, as we see the layout includes a dorm, a cafeteria, classroom and even a Danger Room, but also a room marked "Off Limits". Some of the new mutants are excited to stay there, and the others, not so much. Illyana says that she remembers how afraid she was when she found out she was a mutant, and she's sure the same happened with Scott, about how they couldn't have a normal life but there is no such thing as normal, as Illyana's sentence is finished by one of the new mutants, and Emma calls her the smart one. After some deliberation, the kids decide (with the exception of the Healer) that they wanna go back and check on their families first, as well as grab some essentials since their moving, and Magik says she'll take them, so Emma says they'll all go. Magik makes portals for everyone, and Magneto decides to stay behind. Once they leave, he wastes no time in updating SHIELD of their whereabouts and states again that none of their powers work. When they arrive at Eva's house, one of the new mutants is checking out Magik, and she tells him "No, Boy... I would break you." She sounds like X's kind of woman. Anyway, Eva's reunion with her mother is cut short as none other than THE FREAKING AVENGERS arrive, Captain America, Captain Marvel, Iron Man, The Hulk, Hawkeye, Spider-Woman and Black Widow, as this issue comes to a close.

Thoughts: Holy crap, wordy Bendis is back ladies and gentlemen. He had Emma reciting a novel at the beginning of this comic. As for this issue, it was pretty average, we basically got to see inside the relationship of Scott and Emma as they decide not to date but to continue to work together, as well as see how Emma dealt with not having her powers. We also got a bit more character development on the new mutants, although this book could use one of those things on the opening page with everyone's picture and name so I remember who is who. I'd say the best parts of this issue were being freaked the eff out by Magik and seeing how quickly Magneto betrayed his team. I'm excited to see the Avengers confront Scott and his team in the next issue though. as for this issue, it was fine, nothing bad, nothing amazing, as X would say, a perfectly acceptable comic.

Emma Frost: I think you hate yourself so much that you can't imagine anyone not hating you.