Hey True Believers, JT here, imitating Stan "The Man" Lee, with my first review of the week. Today's comic is the most recent issue of Superior Spider-Man. After Spidey took a life in the last issue of Superior, I can only imagine what's going to happen in this issue. 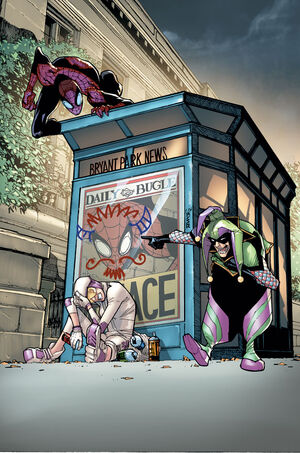 Summary: Things start off with Mayor Jameson announcing he's shutting down The Raft, since so many criminals break out of there anyway. His press conference is cut short when Screwball and Jester, who are basically villains who are inspired by the show Punk'd, show up and use their speed and wacky exploits to pie and pants Mayor Jameson like an old Three Stooges episode. We see Norah, Phil Urich, and others laughing when it goes viral, including Peter, but his laugh is cut short when Spider-Man receives a message from Jameson asking him to meet him. Spidey meets with Jameson and after a bit of back and forth, Doc agrees to help Jameson by apprehending Jester and Screwball. from there we see the Avengers deciding that they may have to cut Spidey loose, considering how brutal he's been and the fact he recently killed a man, but surprisingly, Wolverine sticks up for him, saying everyone there has blood on their hands and it doesn't seem right to ditch Spidey when he may need them the most, so the Avengers agree to keep an eye on the Web-crawler and play the waiting game. As Doc arrives at college and notices some idiots making fun of his newest friend, Anna Maria, for being a little person, Doc thinks about when he was bullied as a kid. This causes Peter Parker, who has been absent for this issue so far since he's going through Doc's mind to try to find a way to get his body back, to go along for the ride, as every time Doc remembers a memory, Peter sees it too. Anna Maria keeps Doc Parker from beating up the goons and says she invited him to talk to his professor and apologize for the "Schnoz" comment. While their having coffee, Jester and Screwball are spotted by a Spider-Bot so Ock excuses himself and heads after them.Turns out everytime someone links to the video Screwball and Jester did with Jameson, their programs phish through their security systems for passwords and credit card info, which is a genius plan. Spidey engages the duo and they go live, with Spidey being temporarily distracted after punching Screwball in the boob.... well, I laughed, which also led to Spidey being hit in the crotch by a slingshot, which also made me laugh, because I am a child apparently. They blast Spidey with balloons filled with paint which blinds him, causing him to rip the lenses off of his glasses, and Jester steps on them, which pisses him off because in the flashback from earlier, a kid stomped his glasses. Spidey goes wild and beats Jester and Screwball senseless, repeatedly slashing with his claws as Jameson watches on smiling, Mary Jane watches in disbelief, and Wolverine admits that the Avengers will have to act. Peter finally comes top-side to see the aftermath, as Screwball and Jester are left a bloody mess with Superior Spider-Man towering over them.

Thoughts: Man.... this was a pretty awesome issue. This issue revolved around bullying as the central theme, with Spidey helping Jameson due to Spidey's past-bullying, the idiots bullying Anna Maria, and Spidey snapping and beating down Jester and Screwball because he was just taking out years being bullied on them now that he's in a position if power, as seen by Peter popping up and saying how Doc's memories were jumping around. The stuff with Screwball/Jester and Jameson was fun, and it made sense he'd call in his new buddy Spider-Man to deal with them. I also enjoyed the stuff with The Avengers debating about Spider-Man, but his actions pretty much making them have to get involved. I'm also surprised at how likable Slott has manages to make Anna Maria after only two appearances. I think the best thing here was keeping Peter to a minimum, because if he's searching Doc's thoughts it allows Doc to get away with more since Peter isn't influencing his conscious. Overall, I really enjoyed this comic, there was a bit of humor, some action, storyline development with The Avengers, Anna Maria, MJ's brief appearance and Phil Urich's at the beginning of the issue. Overall this was a good issue and made me very excited for the next one.

Superior Spider-Man: You're not laughing now?! ARE YOU?!