Hey comic fans, JT here with my second review of the week, Uncanny X-Men. After the last issue where Dormammu pulled Magik and the rest of the Uncanny team and students to Limbo, let's see how they deal with mounting an escape...  And that's about as far as JT got with this review...  Hey all, X here to finish this review off.  Mi amigo wound up hurting his hand, and as such wasn't able to finish this review off.  Poor JT also won't be joining in on tomorrow's Best of the Rest post, nor will he be able to get a Throwback Tuesday post up.  That means it'll be all X, all the time, at least until JT's hand heals up.  Hopefully for Wednesday and New Comic Day.  So hey, I get to review an issue of Uncanny X-Men.  Huzzah...  Or something.  I wasn't a fan of the prior issue, and the way Bendis decided to make Dormammu into Magik's bitch.  Here's hoping the Dread Lord Bendis does a better job writing the Dread Lord Dormammu here. 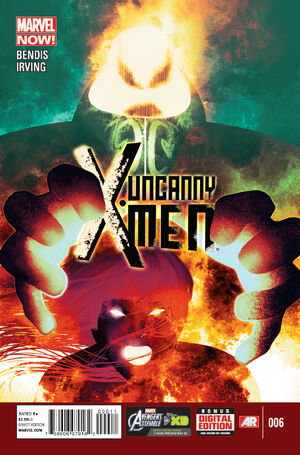 Summary: Dormammu properly treats Magik like HIS bitch in Limbo this time around.  Lord Summers tries a full scale optic blast on the Dread One, but it does no real damage.  All the while, Dormammu taunts Magik, telling her he was going to kill her friends, because Dormammu is awesome!  Dormammu finally has enough of Lord Summers' band of X-Men, and unleashes the Mindless Ones on the group.  The Evil X-Men put up a valiant effort, but end up overwhelmed by the endless hordes of the Dark Dimension.  Also, Dazzler joins SHIELD as their mutant adviser.

Thoughts: Way, way better than the last issue.  Dormammu was treated properly here(as a God!!), and shrugged the Evil X-Men off.  Let's face facts, Dormammu doesn't rule a country, he doesn't rule a planet, he doesn't rule a galaxy, he commands an entire DIMENSION!  Magicians invoke his name and use his power when crafting spells!  Sorry, there's NO WAY Magik should be able to spank a being with a resume like the Dread One has.  So I was really happy to see Bendis rectify last issue's follies.  Of course, this IS Bendis we're talking about, so there were naturally parts where I could only scratch my head in confusion...  Dazzler as the mutant adviser to SHIELD?  For real?  I mean, don't get me wrong, I like Dazzler and all, but why would SHIELD hire an ex-disco singer to advise them on all things mutant?  That would be like the US hiring Lady Gaga as their British ambassador!  It just doesn't fit!  So yeah, while there was some good here, it was still a Bendis comic, meaning it was far from perfect.