Hey guys and gals, JT here and it's that special time of the week! The day after the Best of the Rest and before the new comic week starts, Throwback Tuesday! This week we've got a doozy... yeah I said doozy, shut up, as I stumbled into a goldmine known as "Superman's Girlfriend, Lois Lane." So yeah, get ready for a few of those for my next few Throwback Tuesday's. Anyway, this issue features Lois becoming a Black Woman for twenty-four hours... so.. yep. 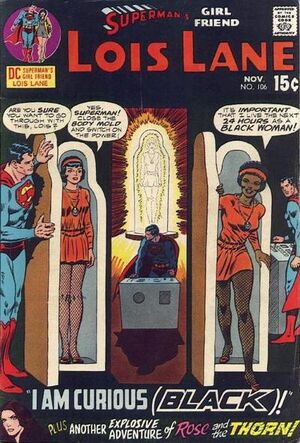 Summary: This issue starts with Black Lois, who I'll call B-Lo for the rest of this because why the hell not, asking Superman if he'll marry her now that she's black. Really? This didn't have anything to do with the issue because on the next page Lois is white and hasn't turned black yet. Anyway, in this issue Lois head's to the black community of Metropolis, known as Little Africa, because that's what black people would call it apparently. Lois goes around Little Africa (Ugh) and tries to talk to everyone but no one will talk to a white person. She finally gets an old woman to talk to her, but it turns out she's blind and when she hears Lois' voice, she gets up and walks away. HA! Superman checks in on Lois and she has him fly her to the Fortress of Solitude where she uses a machine called the Platimold, which when Superman pulls the Transformoflux pack (THESE ARE NOT WORDS!) it turns Lois into a black woman.

B-Lo has Superman fly her back to her apartment so she can change into her hoop earrings, head wrap scarf and Dashiki, cause apparently white women keep those in their closets just in case they become black women. B-Lo quickly learns how different things are when her favorite cabbie won't stop for her because she's black. B-Lo eventually finds a woman to interview, and this woman has it rough, she even has a rat in her daughter's room that's so brave he'll come out during the day! Also, plaster is falling off the roof because the building is basically owned by a Slum Lord. B-Lo sees how this woman is living and starts crying, then heads around the city to further investigate...sigh... Little Africa. She comes across a black man named Dave that spoke ill of her while she was white but is very friendly now that she's black. Before Dave and B-Lo can talk, Dave chases after some criminals that are selling drugs to the community! Black Dynamite...I mean Dave, doesn't want people selling drugs to the community! Dave quickly learns that he should mind his own damn business, when he gets shot by the two drug peddling criminals. Superman arrives, literally a second late, and melts their guns but didn't stop Dave from getting shot for some reason... Superman then knocks out the criminals and picks up Dave and Lois to fly them to a nearby hospital. They determine that Dave will need a blood transfusion and he's type O-Negative, which causes Superman to state that he can't help, because he's not his blood type and even if he COULD, no needle could penetrate his skin. Well why even say that?! Luckily, B-Lo is Dave's blood type, so they pull a reverse Archie Bunker/Sammie Davis and she gives him some blood. After giving up blood, B-Lo plays the race card when asking Superman if he'd marry her if she couldn't change back, he tries to play the Alien card, but sorry my brotha, the race card trumps all! Luckily for the Son of Krypton, B-Lo's pigment lightens up as she turns back into a white woman. Dave wakes up and asks for the woman that helped him, as Lois goes to see him, Dave is obviously shocked but then smiles and shakes Lois' hand as this issue ends.

Thoughts: How did this make it to 106 issues?! How did it make it PAST 106 issues?! How did it make it past SIX issues?! Also, she gave him blood, they shook hands and that was it! That seemed like such a weird ending, they literally said nothing. He didn't ask her why she was basically in black face or anything! And whoever named the black community "Little Africa" should be slapped. That just sounds... wrong. Anyway, this absurd issue had it all, white women as black women, Dave saying stopping criminals was Man's work, Superman being a dick and saving Dave literally RIGHT AFTER he got shot, and of course, Lois proposing to Superman. So yeah, this was an enjoyable and very stupid comic, which is exactly what I'm looking for when it comes to Throwback posts!